A group does not form in an appropriate style from the very first time. It has to pass a sequential way for the utmost development. This sequential way was developed by Bruce Tuckman (1965). The model describes four linear stages and that’s are forming, storming, norming, and performing. A group will go through in its unitary sequence of the decision, making. “Adjourning”, was added in 1977 when a new set of studies were reviewed.

The stages of group development are described in the diagram below- 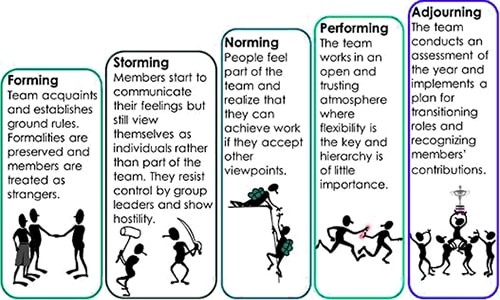 Group Development is a dynamic process. How do groups evolve? There is a process of five stages through which groups pass through. The process includes the five stages: forming, storming, forming. performing, and adjourning.

The first stage in the life of a group is concerned with forming a group. This stage is characterized by members seeking either a work assignment (in a formal group) or another benefit, like status, affiliation, power, etc. (in an informal group). Members at this stage either engage in the busy type of activity or show apathy.

The next stage in this group is marked by the formation of dyads and triads. Members seek out familiar or similar individuals and begin a deeper sharing of self. Continued attention to the subgroup creates a differentiation in the group and tensions across the dyads/triads may appear. Pairing is a common phenomenon. There will be conflict about controlling the group.

The third stage of group development is marked by a more serious concern about task performance. The dyads/triads begin to open up and seek out other members of the group. Efforts are made to establish various norms for task performance.

Members begin to take greater responsibility for their own group and relationship while the authority figure becomes relaxed. Once this stage is complete, a clear picture will emerge about the hierarchy of leadership. The norming stage is over with the solidification of the group structure and a sense of group identity and camaraderie.

This is a stage of a fully functional group where members see themselves as a group and get involved in the task. Each person makes a contribution and the authority figure is also seen as a part of the group. Group norms are followed and collective pressure is ‘exerted to ensure the Process of Group effectiveness of the group.

In the case of temporary groups, like project team, task force, or any other such group, which have a limited task at hand, also have the fifth stage, This is known as adjourning. The group decides to disband. Some members may feel happy over the performance, and some may be unhappy over the stoppage of meeting with group members. Adjourning may also be referred to as mourning, i.e. mourning the adjournment of the group.

Why do people join groups?