Home Business What are the legal provisions for appointment of a company Auditor? 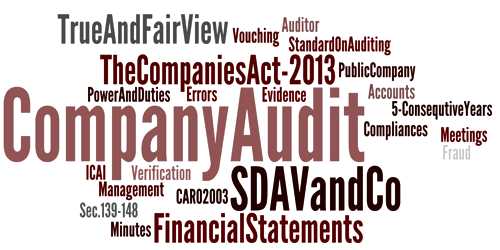 Audit of a company is primarily a financial audit where the auditor is required to report to members in relation to the company’s financial report, and adequacy of financial and statutory record keeping. The following is the appointment procedure of an auditor according to the Company Act, 1994:

(a) Appointment in general meeting:

Provided that no person can be appointed an auditor of any company unless his written consent has been obtained prior to such appointment or re-appointment.

(b) Thirty days of intimation:

Every auditor appointed under sub-section (1) shall, within thirty days of the receipt from the company of the intimation of his appointment, inform the Registrar in writing that he has accepted or refused to accept the appointment.

(c) Reappointment of prior auditor:

At any annual general meeting a retiring auditor, by whatsoever authority appointed, shall be reappointed, unless –

a resolution has been passed at that meeting appointing somebody else instead of him or providing expressly that be shall not be re-appointed.

(d) Notice to Government: The Company shall, within seven days of the Government’s power under sub-section (4) becoming exercisable, give notice of that fact to the Government; and, if a company fails to give such notice, the company and also every officer of the company who is in default, shall be punishable with fine which may extend to one thousand take.

(f) Casual vacancy: The Board may fill any casual vacancy in the office of an auditor, but while any such vacancy continues, the remaining auditor or auditors, if any, many acts.

(g) Appointment of casual vacancy: Any auditor appointed in a casual vacancy shall hold office until the conclusion of the next annual general meeting.

Limitation or Disadvantage of Financial Audit