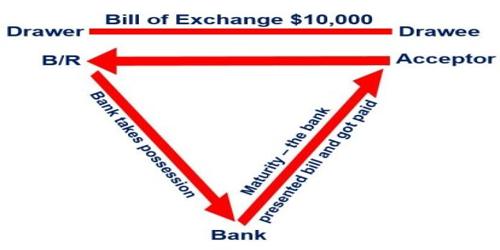 Discounting of Bills of Exchange

This is another popular type of lending by modern banks. Through this method, a holder of a bill of exchange can get it discounted by the bank. In a bill of exchange, the debtor accepts the bill drawn upon him by the creditor (i.e., holder of the bill) and agrees to pay the amount mentioned on maturity. After making some marginal deductions (in the form of commission), the bank pays the value of the bill to the holder. When the bill of exchange matures, the bank gets its payment from the party, which had accepted the bill. Thus, such a loan is self-liquidating. A bill of exchange is a written and legally-binding document depicts the obligation of the seller of good to pay a particular amount of money to the seller or payee on a particular date.

Explanation: It is a written order used primarily in international trade that binds one party to pay a fixed sum of money to another party on demand or at a predetermined date. If the drawer of the bill does not want to remain till the due date of the bill and is in require of money, he might sell his bill to a bank at a definite rate of discount. The bill will be endorsed by the drawer with a signed and dated order to pay the bank. The bank will become the holder and the owner of the bill. After getting the bill, the bank will pay cash to the drawer equal to the face value less interest or discount at an agreed rate for the number of days it has to run. This process is known as discounting of a bill of exchange.

Why Central Bank does regulate Credit?