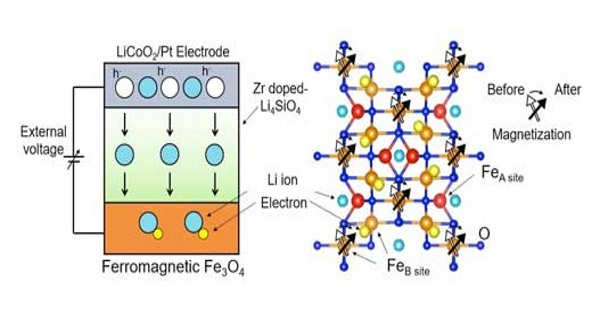 The ability to control magnetism (or spin directions) with an electric voltage is critical for developing future, low-energy, high-speed nano-electronic and spintronic devices such as spin-orbit torque devices and spin field-effect transistors. The ultra-high-charge, doping-induced magnetic phase transition in a layered ferromagnet opens up new possibilities in antiferromagnetic spintronic devices.

The FLEET collaboration of researchers from RMIT, UNSW, the University of Wollongong, and FLEET partner High Magnetic Field Laboratory (China) demonstrates for the first time that proton intercalation can induce ultra-high electron doping concentrations (above 1021 cm-3) in the layered van der Waals (vdW) metallic material Fe5GeTe2, and can further cause a magnetic ground state transition.

The development of layered, vdW magnetic materials has accelerated the search for novel vdW spintronic devices. Antiferromagnets (AFMs) have distinct advantages as building blocks for such future spintronic devices when compared to itinerant ferromagnets. Because of their resistance to stray magnetic fields, they are suitable for memory devices, and AFM-based spin-orbit torque devices require less current density than ferromagnets.

“Our previous experience with Fe3GeTe2 allowed us to quickly identify and evaluate the material’s magnetic properties,” Cheng says. “Some studies indicate Fe5GeTe2 is sensitive to local atomic arrangements and interlayer stacking configurations, implying that doping could induce a phase transition in it.”

The researchers first used electron transport measurements to investigate the magnetic properties of Fe5GeTe2 nanosheets of varying thicknesses. However, preliminary transport results show that the electron density in Fe5GeTe2 is as expected, indicating that magnetism is difficult to modulate by traditional gate voltage due to the electric-screen effect in metal:

“Despite the high charge density in Fe5GeTe2, we knew it was worth trying to tune the material via protonic gating, as we have previously achieved in Fe3GeTe2 (Physical Review Letters 2020), because protons can easily penetrate into the interlayer and induce large charge doping, without damaging the lattice structure,” says co-author Dr. Guolin Zheng (also at RMIT).

The team, like all classical-computing beyond-CMOS researchers, is attempting to develop a better form of the transistor, the switches that serve as the binary backbone of modern electronics.

A solid protonic field-effect transistor (SP-FET) is a type of transistor that switches based on proton insertion (intercalation). Unlike traditional proton FETs, which switch by dipping liquid and are thought to be promising candidates for bridging traditional electronics and biological systems, the SP-FET is solid and thus suitable for use in real devices.

The SP-FET has been shown to be extremely effective at tuning thick metallic materials (i.e., it can induce high charge doping levels), which are extremely difficult to modulate using traditional dielectric or ion liquid gating techniques (because of electric screening effect in metal).

The team was able to dramatically change the carrier density in Fe5GeTe2 and change its magnetic ground state by fabricating a solid protonic field-effect transistor (SP-FET) with it. The experimental results were confirmed by further density functional theory calculations.

“All of the samples show that the ferromagnetic state can be gradually suppressed by increasing proton intercalation, and finally, we see several samples with no hysteresis loops, indicating a change in the magnetic ground state, and the theoretical calculations are consistent with the experimental results,” Cheng says.

“The realization of an AFM phase in metallic vdW ferromagnet Fe5GeTe2 nanosheets is a significant step toward vdW antiferromagnetic devices and heterostructures that operate at high temperatures,” says co-author A/Prof Lan Wang (also at RMIT).

“Again, this demonstrates that our protonic gate technique is a powerful weapon in electron transport experiments, and probably in other areas well.”

In June 2021, the paper “Gate-controlled magnetic phase transition in a van der Waals magnet Fe5GeTe2” was published in Nano Letters. Aside from the Australian Research Council, funding was provided by the Natural Science Foundation of China, the National Key Research and Development Program of China, the Fundamental Research Funds for Central Universities, the Hefei Science Center’s Collaborative Innovation Program, and the High Magnetic Field Laboratory (China).

The RMIT Micro Nano Research Facility (MNRF) in the Victorian Node of the Australian National Fabrication Facility (ANFF) and the RMIT Microscopy and Microanalysis Facility (RMMF), as well as the High Magnetic Field Laboratory, were used for the experimental research (Anhui, China).

FLEET, an Australian Research Council Centre of Excellence, is researching spintronic devices as part of Enabling Technology B. The Centre for Future Low-Energy Electronics Technologies (FLEET) brings together over a hundred Australian and international experts to create a new generation of ultra-low energy electronics. The impetus for such work stems from the growing challenge of energy used in computation, which consumes 5–8 percent of global electricity and doubles every decade.