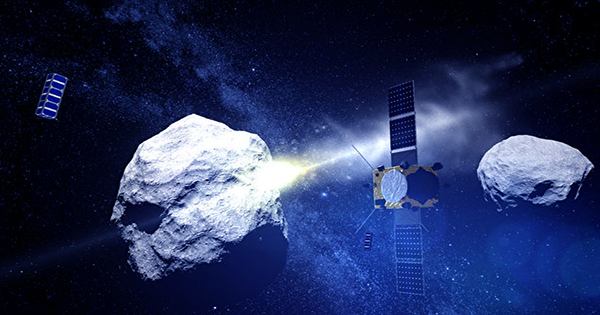 In Netflix’s upcoming world-ending catastrophe, film Don’t Look Up, astronomers Leonardo DiCaprio and Jennifer Lawrence warn the US government of a looming comet attack, only for the White House to dismiss their warning. With a slogan like “Based on true events that have not transpired yet,” this may be a cautionary story.

Fortunately, NASA is already on the case, with its first-ever planetary defense mission due to launch this week, crashing into an asteroid and knocking it off course. Yes, NASA is sending a probe into space to purposefully crash with an asteroid in order to see if this is a viable method of altering the trajectory of any potentially dangerous space objects headed our way.

To be clear, there presently no known objects with trajectories that would take Earth out, but it is always a good idea to be prepared. “Planetary defense” defined by NASA as “identifying asteroids before they find us.”

The asteroid moonlet Dimorphos, which circles the bigger asteroid Didymos, is the target of the Double Asteroid Redirection Test (DART) mission, which slated to launch on November 24. The twin system, which does not pose a threat to Earth, is an ideal candidate for NASA’s “kinetic impactor” technology to be tested.

At roughly 24,140 kilometers per hour (15,000 miles per hour), the probe will collide with the 160-meter-wide (525-foot) moonlet, transferring its kinetic energy to the smaller asteroid and pushing it closer to its 780-meter-wide (2,560-foot) asteroid partner. Dimorphus will orbit Didymos at least 73 seconds quicker than before if it works.

Unfortunately, the spacecraft will take ten months to reach its destination, and it will only glimpse Dimorphus for about an hour before colliding, so we will not know if the mission is successful until late next year.

However, you may see the launch. The probe will launch on a SpaceX Falcon 9 rocket from Vandenberg Space Force Base in California at a time no sooner than 1:20 a.m. EST on November 24. You can watch the launch live on NASA’s Facebook, Twitter, and YouTube pages, or you can watch it right here.

This is not the first time NASA has studied what to do in the event that a “planet-killer”-sized asteroid collides with Earth. Near-Earth Objects (NEOs) are already detected and monitored by NASA’s Planetary Defense Coordination Office for possible dangers.

It keeps track of any NEOs that circle the Sun and arrive within 48 million kilometers (30 million miles) of Earth’s orbit, with a size large enough to do substantial damage on Earth (30 to 50 meters (98 to 164 ft).

In reality, the space agency collaborates with other agencies around the world every two years for a tabletop exercise to save the Earth from an oncoming asteroid. Regrettably, the experiment had mixed results. The asteroid successfully averted from Denver in 2019, but it then devastated New York.

The exercise failed to avert the annihilation of a major portion of Europe in May of this year when an oncoming asteroid was “identified” that would crash in six months. Experts understood that deflecting an asteroid would require at least five years’ warning, thus extensive surveillance.

The most likely date for an impact is September 24, 2182, with a chance of 1 in 2,700 on that precise day. So it is a low-risk situation, but as NASA points out, it is wise to be prepared just in case.

It’s May 4, So Grab Your Telescope. “Baby Yoda” Is The Nebula You Are Looking For

Russia has Threatened to Leave the International Space Station by 2025

Instantly Thinking UFOs are Aliens is “The Height of Foolishness”, Says Retired Astronaut

Hubble Discovers The Barrier Preventing Nearby Galaxies From Dissolving