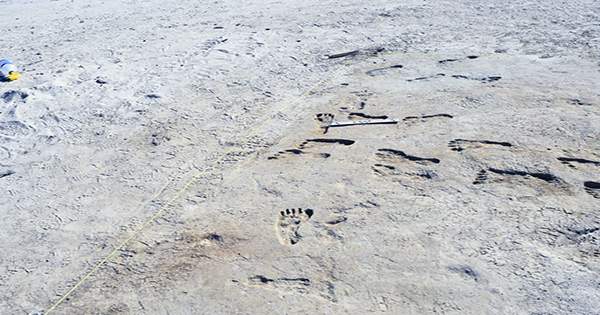 In what is now White Sands National Park in New Mexico, the oldest known human footprints in the Americas were discovered in an ancient lakebed. The footprints, which date from 23,000 to 21,000 years ago, call into question many of the commonly held beliefs about how and when humans first arrived on the continent. David Bustos of the White Sands National Park was the first to notice the tracks, as he had seen numerous of them while trekking across the White Sands region. In January 2016, he invited a team of specialists to inspect the footprints, which marked the start of the present excavation program.

The investigation of this groundbreaking discovery was published today in the journal Science by a multinational team from Bournemouth University in the United Kingdom, the University of Arizona, the US Geological Survey, and the National Park Service. The researchers eventually discovered that the prints were made by humans, including children and teenagers, as well as mammoths and a dog-like carnivore. The human tracks were etched into the earth sometime between 23,000 and 21,000 years ago, according to an examination of the surrounding sediment layer.

Dr. Sally Reynolds, the co-author and mammalian palaeontologist at Bournemouth University told IFLScience, “These are the oldest known, well-dated footprints in the Americas.” The question of how and when people originally arrived in the Americas is still a contentious one. The most widely held belief until recently was that the earliest occupants of the Americas were a group known as the “Clovis culture,” who arrived around 15,000 to 13,000 years ago.

Recent findings have pushed this timeframe back, with estimates ranging from 25,000 to 33,000 years ago for the arrival of the earliest occupants. However, there is a scarcity of specific proof. These newly discovered footprints strongly suggest that people were stomping across the Americas at least 21,000 years ago.

It is possible for tools and bones to migrate to different sediment strata, which can be used to date them. “Footprints are extremely fragile within the sediment, and they cannot travel down like a tool or bone might under certain circumstances,” says the author “Dr. Reynolds elaborated.

“They are definitely human because of the amount of tracks and their distinct shape.” This could have far-reaching consequences for our knowledge of prehistoric human migration. The Bering land bridge, which had formed between northeastern Siberia and western Alaska, is thought by most academics to have brought the first humans to the Americas. They then preceded south through western Canada’s inland ice-free corridor and/or a Pacific coastal route.

However, this portion of the earth was engulfed in the last Ice Age, also known as the Last Glacial Maximum, roughly 23,000 years ago (LGM). This migration through America was originally thought to be too difficult to complete during the LGM. These large footprints, on the other hand, clearly state the opposite.