Home Business The Concept of Entrepreneurship 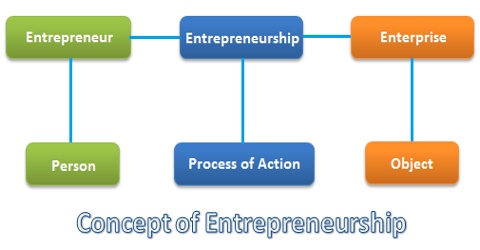 The term ‘entrepreneur’ was first introduced in economics by the early 18th century French economist Richard Cantillon. In his writings, he properly defined the entrepreneur as the “agent who buys means of production at definite prices in order to sell the produce at uncertain prices in the future”. Since then a inspection of the usage of the term in economics shows that entrepreneurship implies risk/uncertainty bearing; coordination of dynamic resources; introduction of innovations; and the provision of capital.

Entrepreneurship is proceed of setting out on your own and starting a business instead of working for someone else in his business. While entrepreneurs must deal with a bigger number of obstacles and fears than hourly or salaried employees, the payoff may be far greater as well. We would like to describe entrepreneurship as a methodical, determined and innovative activity of identifying a need, mobilizing resources and organizing production with a view to delivering value to the consumers, returns for the investors and profits for the self in harmony with the risks and uncertainties associated with business. This description points to certain characteristics of entrepreneurship that we turn our attention to.

Disadvantages or Limitations of Sales Promotion

Why Innovation is Basic Distinctiveness for Entrepreneurship?

Importance of Packaging and Labeling in Marketing