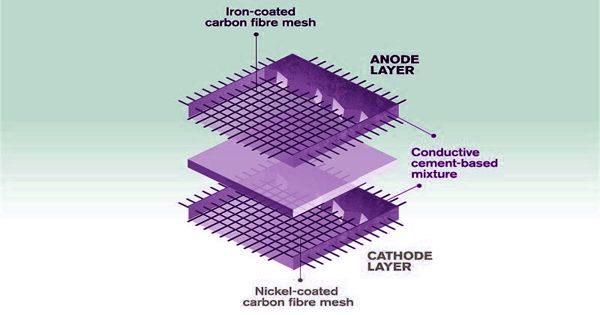 Researchers have developed a new concept for rechargeable cement batteries that could allow concrete buildings to store energy. Home batteries are becoming increasingly popular methods of storing solar energy to power homes at night, but what if the entire house could be turned into a battery? Rechargeable cement batteries demonstrate that the concept is feasible, even if it has a long way to go before becoming affordable.

The study was conducted at Chalmers University of Technology, where scientists were working on developing more sustainable building materials, with a focus on concrete. As the world’s most widely used material and one that requires a lot of energy to produce, there has been a lot of research into how to reduce the carbon footprint of concrete, and the authors of this new study have come up with an intriguing potential solution.

To make concrete blocks, Dr Emma Zhang of Chalmers University of Technology in Sweden mixed 0.9 percent carbon fibers into cement and poured it over a metal-coated carbon fiber mesh. Zhang and colleagues report in the journal Buildings that by using iron anodes and nickel cathodes, these blocks can be converted into rechargeable batteries.

Zhang’s battery, at 0.8 Watthours per liter, is hundreds of times less energy dense than a lithium-ion battery and is completely useless for transportation. It does, however, store approximately ten times more energy than previous rechargeable concrete batteries. These, according to Zhang, “showed very low performance,” forcing her and her colleagues to look for new ways to make the electrodes.

Cement Batteries Could Let Your Whole House Store Electricity. Rechargeable cement batteries prove the idea is possible, even if it has a long way to go to be affordable.

Zhang believes that at that energy density, the first applications will be off the grid, most likely in conjunction with solar panels – for example, powering 4G services in remote locations. Bridges, for example, frequently require a small amount of electricity for sensing devices or cathodic protection against corrosion of metal reinforcements, and Zhang’s work could be a perfect fit.

The team settled on this design after much experimentation, with the goal of improving on previous designs for concrete-based batteries, which they claim performed poorly in testing. This novel, rechargeable design is described as a world-first concept, and early experiments show that the team’s innovative thinking is bearing fruit.

If a market develops in these niches, mass production and further refinements could lower prices, opening up a wider range of possibilities.

“We envision that in the future, this technology will enable whole sections of multi-story buildings to be made of functional concrete.” Given that any concrete surface could have a layer of this electrode embedded in it, we’re talking about massive amounts of functional concrete,” Zhang explained.

Before that can happen, Zhang admits that the battery’s life must be extended to match the long periods of time that concrete structures are expected to last. If that is not possible, it will be necessary to replace them while the building is still in use.

The concrete-based battery was discovered to have an energy density of 7 Wh per square meter of material, which the team claims could be more than ten times greater than previous concrete-based batteries. Its capacity is still far lower than that of commercial batteries, but the fact that it is made of concrete, which can be scaled up to form massive structures, may help compensate for its limited capacity.

This isn’t the first time that building materials have been used to store electricity. Scientists demonstrated last year that hematite in house bricks can function as an electrode. They created supercapacitors capable of efficient storage by depositing polymers through bricks during manufacturing. Although these bricks have the potential to reduce the cost of storing small amounts of electricity for emergency use, the energy density may be too low for large-scale storage.

Concrete production currently has a massive environmental cost, accounting for 4-8 percent of global carbon emissions, among other crimes against the planet. Efforts to find less harmful alternatives continue, which should be possible since the Romans did it 2,000 years ago.