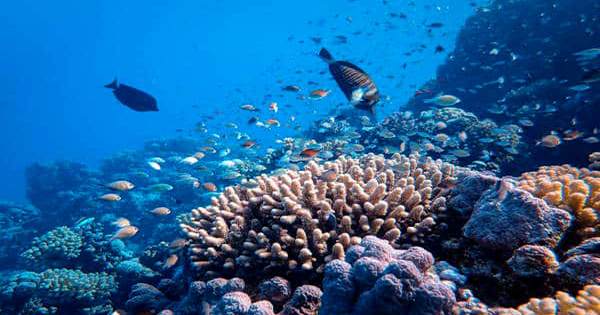 Off the coast of Tahiti, French Polynesia, a massive, “pristine” coral reef has been discovered. It is thought to be one of the world’s largest coral reefs, stretching 3 kilometers (almost 2 miles) – roughly 27 football fields. It is also one of the healthiest, because of the considerable depth at which it was discovered, according to the scientists that discovered it as part of UNESCO’s ocean mapping effort.

The majority of the world’s known reefs are up to 25 meters (82 feet) deep, while the newest member is between 30 and 65 meters (98 to 213 feet) below the ocean’s surface. The extra few meters, according to the study, maybe protect it from global warming-induced bleaching.

This part of the deep ocean, known as the “twilight zone,” is rarely investigated, making it a potentially untapped resource for uncovering coral reefs, which the team plans to examine in the future. “As of now, we know more about the Moon’s surface than we do about the deep ocean.” “Only 20% of the total seafloor has been mapped,” UNESCO Director-General Audrey Azoulay stated in a statement.

“This extraordinary discovery in Tahiti… [Will] expand our understanding of what lies beneath.” According to New Scientist, the rose-shaped corals discovered in November have a diameter of roughly 2 meters (7 feet) and are largely one of two species: Porites rus dominates the upper portion and Pachyseris speciosa dominates the lower portion.

The huge reef took UNESCO’s team of international divers 200 hours to study, but their efforts appear to have paid off. “Seeing enormous, magnificent rose corals that stretch as far as the eye can see was fantastic.” Alexis Rosenfeld, a French photographer who was part of the diving crew that made the find, described it as “like a work of art.”

Coral reefs are an important food supply and home to a vast number of organisms, so findings like this are critical for research. They can also tell us a lot about biodiversity. They also defend against coastal erosion and even tsunamis, and the many creatures that reside there can be useful in medical studies. Unfortunately, they are one of the ocean’s most endangered ecosystems; sensitive to global warming is consequences of rising water temperatures, pollution, and elevated carbon dioxide levels.

“Because shallow waters warm faster than deeper seas, deeper reef systems may become coral refuges in the future.” Professor Murray Roberts, a senior marine biologist from the University of Edinburgh, told the BBC, “We need to get out there and survey these particular sites, understand their ecological role, and make sure we safeguard them for the future.”

Science-based Ways To Tell If Your Cat Loves You

Turns Out, We Still Don’t Know What Megalodon Actually Looked Like