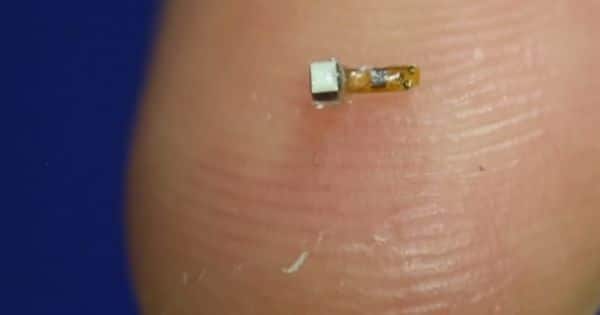 A team led by neuroscientist Jose Carmena and electrical and computer engineer Michel Maharbiz from the University of California, Berkeley, has provided the first demonstration of what the researchers call “ultrasonic neural dust” to monitor neural activity in a live animal. They measured activity in an anesthetized rat’s sciatic nerve and a leg muscle in response to electrical stimulation applied to its foot. “My lab has always worked on the nexus of biology and man-made things,” Maharbiz explains. “We make tiny gadgets that connect synthetic and biological stuff.” The findings were published in the journal Neuron last week.

The system eliminates both wires and batteries by using ultrasound for both wireless communication and powering the device. It consists of an external transceiver and a “dust mote” about 0.8x1x3 mm in size that is implanted inside the body, according to the team. The transceiver sends ultrasonic pulses to the implant’s piezoelectric crystal, which converts them to electricity to provide power. The implant uses electrodes to record electrical signals in the rat, which it then uses to change the vibration of the crystal. Backscatter occurs when these vibrations are reflected back to the transceiver, allowing the signal to be recorded.

“Neural Dust” Could Enable a Fitbit for the Nervous System. A technology with the potential to blur the boundaries between biology and electronics has just leaped a major hurdle in the race to demonstrate its feasibility.

“This is the first time someone has used ultrasound as a method of powering and communicating with extremely small implantable systems,” says one of the paper’s authors, Dongjin Seo. “This opens up a host of applications in terms of embodied telemetry: being able to put something super-tiny, super-deep in the body, which you can park next to a nerve, organ, muscle or gastrointestinal tract, and read data out wirelessly.”

The team also intends to create implants that can both stimulate and monitor nerves, enabling closed-loop control of nervous system activity. This has the potential to be applied in the emerging field of bioelectric medicine, which promises to deliver an entirely new class of therapies known as electroceuticals. GlaxoSmithKline, for example, recently announced a collaboration with Google sister company Verily Life Sciences to form Galvani Bioelectronics, which will develop implants that can modify nerve signals in order to treat chronic illnesses. Animal studies indicate that the technology could be used to treat type 2 diabetes, and there are numerous other applications. Seo says they are looking into treating bladder control problems and bowel disease.

“While the technology is still in its early stages, preliminary results clearly show the potential of the ultrasonic backscatter approach,” says Victor Pikov, head of research platforms at GSK Bioelectronics, who was not involved in the Berkeley team’s research. “The Berkeley group is on an exciting path to developing a completely novel type of sensor that will have widespread applications in bioelectronic medicines.”

The next step will be to see if the dust motes can survive for long periods of time after implantation, as well as to conduct experiments on awake and freely moving animals. The team then intends to make a variety of improvements. “As we validate that these platforms are stable for long-term use,” Maharbiz says, “we’ll be making them smaller and adding additional functionality like stimulation and other types of sensors.” “The idea that you could use these to collect data about pH, oxygen, chemicals, tumors, and other things deep inside your body and communicate robustly is extremely exciting.”

The team also intends to use multiple transceivers to keep track of moving motes. This would also allow the ultrasonic beam to be directed in order to communicate with multiple implants. “The vision is to implant a large number of these motes anywhere in the body, with a patch that sends ultrasonic waves to wake up the sensors and receive information for any desired therapy,” Seo says. “Everything would be sealed in, with a single patch over the site that can communicate with the implants individually or concurrently.”

According to Seo, the project’s initial goal was to create the next generation of brain-machine interfaces. In 2013, the researchers published a theoretical analysis demonstrating that the technique could work with implants as small as 50 microns in size, a scale comparable to neurons. One of the most difficult challenges for neuroscientists is putting things inside the brain without damaging or disrupting tissue, and part of the problem is that anything larger than a couple of cells tends to provoke biological responses such as inflammation.

Standard implants not only damage tissue, which gradually degrades performance; the wires they require also pose a risk of infection. Previous wireless implants have also had significant drawbacks, such as limited depth and a lifespan ranging from months to two years. These disadvantages are primarily attributed to the devices’ use of electromagnetism (EM). Because EM waves travel much faster than sound, wavelengths for a given frequency are much longer. Because wireless communication requires receivers of similar dimensions to the wavelengths used, this limits the size of the implants.

Short enough EM wavelengths to communicate with tiny implants would be extremely high frequency, causing tissue damage and not penetrating as far. These issues are addressed by ultrasonics. “I was walking in a parking lot one day when it occurred to me that ultrasound might be the answer, because soft tissue is relatively transparent to ultrasound and the wavelengths are ideal,” Maharbiz says. “I got very excited; it was like a eureka moment for me.”

If the team is successful in developing sufficiently small implants, it may pave the way for the treatment of neurological disorders such as epilepsy. It will also be covered by President Barack Obama’s Brain Research through Advancing Innovative Neurotechnologies (BRAIN) initiative, which promotes the development of new tools for communicating with the brain. “What’s exciting about this is that it uses an old technique that we already know a lot about and that’s used in clinical settings every day,” says Miyoung Chun, executive vice president of science programs at The Kavli Foundation, a key player in the BRAIN initiative. “A lot of new tools developed in animals, like optogenetics, are not ready for human application, but there are different opportunities here; this looks really exciting.”

Arc opens its remote career platform to all software developers