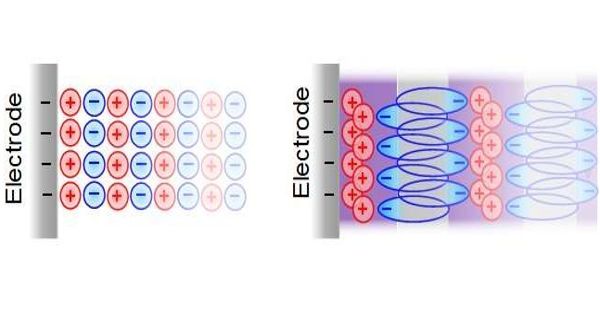 Similar to batteries, supercapacitors are suitable for the repeated storage of electrical energy. Researchers have now presented a particularly safe and sustainable variant of such a supercapacitor.

The main disadvantages of present-day lithium-ion battery technology include limited safety, recyclability, and sustainability, coupled with limited availability of starting materials (for example, cobalt). In the hunt for alternative electrochemical energy storage systems for e-mobility and renewable energy storage, a specific blend of battery and capacitor shows robust potential: It has been tentatively called the “hybrid supercapacitor.” It can be charged and discharged as quickly as a capacitor and can store almost as much energy as conventional batteries. In comparison to the latter, it can be charged and discharged much faster and much more frequently: while a lithium-ion battery achieves a service life of a few thousand cycles, a supercapacitor manages around one million charging cycles.

Researchers at the Graz University of Technology have now investigated in more detail how exactly the electrochemical energy storage in this supercapacitor works and what happens in the nanometer-sized pores of the carbon electrode, and have recently published their promising results in the scientific journal Nature Communications.

The system made of carbon and saltwater

A specifically sustainable, but hitherto largely uninvestigated variant of such a hybrid supercapacitor comprises carbon and aqueous sodium iodide (NaI) electrolyte, with a negative supercapacitor electrode and a positive battery electrode.

Researchers at the Graz University of Technology have now investigated in more detail how exactly the electrochemical energy storage in this supercapacitor works and what happens in the nanometer-sized pores of the carbon electrode, and have recently published their promising results in the scientific journal Nature Communications. “The system we are looking at in detail consists of nanoporous carbon electrodes and an aqueous sodium iodide electrolyte, in other words, saltwater. This makes this system particularly environmentally friendly, cost-effective, incombustible, and easy to recycle,” explains Christian Prehal.

The team used small-angle X-ray scattering and Raman spectroscopy to demonstrate for the first time that solid iodine nanoparticles are formed in the carbon nanopores of the battery electrode while charging, and dissolve again while discharging. This corrects the previously suspected reaction mechanism and has far-reaching consequences, as Christian Prehal explains: “The degree of filling of the nanopores with solid iodine determines how much energy can be stored in the electrode. This enables the energy storage capacity of the iodine carbon electrodes to reach unexpectedly high values by storing all chemical energy in the solid iodine particles.”

This new basic know-how paves the way to hybrid supercapacitors or battery electrodes with higher energy density like never before and very fast charging and discharging processes. Hybrid capacitors such as these have been very effectively analyzed and advanced further for a number of years by Qamar Abbas, presently a Lise Meitner FWF scholarship holder at the Institute of Chemistry and Technology of Materials and another author of the study.

Targeted developments would enable hybrid supercapacitors to be used as a safe, economical, non-flammable, and sustainable substitute for stationary storage of electrical energy. This can be a lucrative option particularly to store the energy obtained from photovoltaic cells in residential houses, for instance.

The team accomplished another innovation pertaining to the investigation approaches used. In the case of Raman spectroscopy, researchers use the interaction of light with matter to understand the properties or structure of a material.