Researchers from Tokyo Medical and Dental University (TMDU) and Niigata University identify a novel mechanism by which tumors progress.

The growth of the tumor tends to be at least partially regulated by the genetic history of the host. Tumor cells reside inside a complex tumor microenvironment in which they are surrounded by other types of cells, including blood vessels, cancer-associated fibroblasts (CAFs), and inflammatory cells. Clinical and epidemiological evidence indicates that the development of premalignant lesions in individuals is very complex. The microenvironment of the tumor consists of a network of molecules that provide structural and biochemical support to all cells. One such molecule is TGF-β, which is known to cause endothelial-mesenchymal transformation (EndMT), a mechanism that includes transforming endothelial cells that form the inner lining of blood vessels to CAFs that modulate tumor progression. 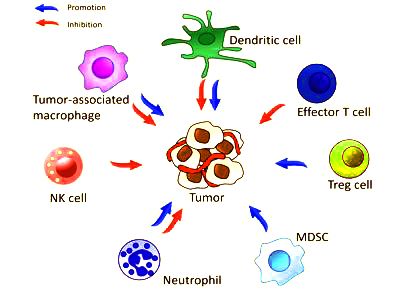 Interactions of immune cells and a tumor

“We have previously shown that CAFs derived from EndMT promote tumor formation and progression. However, we do not know much about the molecular mechanisms underlying these interactions,” says the corresponding author of the study Tetsuro Watabe (TMDU). “The goal of our study was to investigate how the tumor microenvironment contributes to tumor progression.”

Tumor progression requires sequential steps involving proper coordination of cell proliferation, survival, adhesion, migration, and angiogenesis. To achieve their goal, the researchers focused on the protein TNF-α, a known cytokine secreted by inflammatory cells. Because tumors are often infiltrated by inflammatory cells, the tumor microenvironment contains high levels of TNF-α. To understand the roles of TNF-α in TGF-β-induced EndMT, the researchers treated human endothelial cells with TGF-β, TNF-α, or both. TGF-β robustly induced EndMT as shown through increased expression of various markers of CAFs as well as a transition towards a CAF morphology of the human endothelial cells. However, interestingly enough, TNF-α enhanced the molecular effects of TGF-β.

Cancers evolve in complex tissue ecosystems that rely on them for sustained development, invasion, and metastases. Since one of the key biological roles of CAFs is to secrete proteins into the tumor microenvironment and to promote tumor progression, the researchers next cultured human oral cancer cells in the presence of proteins from EndMT-derived CAFs. Researchers also found that oral cancer cells have undergone epithelial-mesenchymal transformation (EMT). Since EMT is a hallmark of tumor growth and metastases, these findings have shown that proteins secreted by CAFs contribute to tumor progression. The researchers also found that these effects of CAFs on tumor progression was suppressed by inhibition of TGF-β, suggesting that TGF-β protein secreted from CAFs induced EMT.

A tumor is a highly complex tissue composed of neoplastic and stromal cells. “These are striking results that identify a molecular mechanism underlying the role of the tumor microenvironment in tumor biology. We hope that our findings will aid in the development of novel cancer therapies,” says first and co-corresponding author Yasuhiro Yoshimatsu (Niigata University).