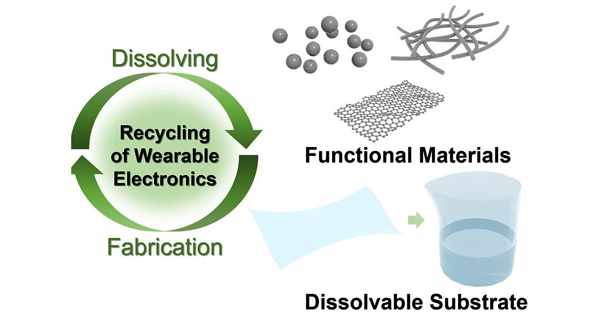 The ability to recycle electronic parts and reuse them to create new devices reduces waste that can harm the environment while also saving money and resources by extending the life of materials. Nanowires have been used to create low-cost, disposable electronics, such as flexible biosensor patches, which, despite their small size, can result in additional electronic waste and underutilization of the sometimes rare and precious materials from which they are made.

North Carolina State University researchers demonstrated a low-cost method for retrieving nanowires from electronic devices that have reached the end of their useful life and then reusing those nanowires in new devices. The work is a step toward more environmentally friendly electronics.

“There is a lot of interest in recycling electronic materials because we want to reduce electronic waste while also getting the most out of rare or expensive materials,” says Yuxuan Liu, first author of a paper on the work and a Ph.D. student at NC State. “We’ve demonstrated a method for recycling nanowires that we believe could be extended to other nanomaterials, including nanomaterials containing noble and rare-earth elements.”

Researchers have demonstrated a low-cost technique for retrieving nanowires from electronic devices that have reached the end of their utility and then using those nanowires in new devices. The work is a step toward more sustainable electronics.

“Our recycling technique is distinct from conventional recycling,” says Yong Zhu, the paper’s corresponding author and the Andrew A. Adams Distinguished Professor of Mechanical and Aerospace Engineering at NC State. “When a glass bottle is recycled, it is completely melted down before being used to make another glass object. In our method, a silver nanowire network is isolated from the other materials in a device. After that, the network is disassembled into a collection of individual silver nanowires in solution. These nanowires can then be used to build a new network and be integrated into new sensors or other devices.”

The new recycling technique considers a device’s entire life cycle. The first step is to create devices out of polymers that are soluble in solvents that do not dissolve the nanowires. When a device is used, the polymer matrix containing the silver nanowires dissolves, leaving the nanowire network behind. The network is then immersed in a separate solvent and subjected to ultrasound. This scatters the nanowires and separates them from the network.

The researchers created a wearable health sensor patch that could be used to track a patient’s temperature and hydration in a proof-of-concept demonstration. The sensor was made up of silver nanowire networks embedded in a polymer. The sensors were tested to ensure that they were fully functional by the researchers. A sensor patch is normally discarded after it has been used.

After four life cycles, the performance of the nanowire network can be improved by introducing new silver nanowires into the mix. “With our method, you get far more use out of the nanowires,” Zhu says. “Even after the nanowires have degraded to the point where they can no longer be reused, we can still use them as feedstock for conventional recycling. It represents a significant reduction in waste.”

Identifying a solvent with a low surface tension for use in breaking up the nanowire network is critical to the recycling process. “Low surface tension is important because it allows the solvent to diffuse into the narrow junctions between nanowires in the network, facilitating network disassembly,” Liu explains.

“The approach we’ve demonstrated here could be used to recycle other nanomaterials, such as nanoparticles, carbon nanotubes, other types of nanowires, and two-dimensional materials,” Zhu says.

Social Media and Dating Apps Have a Serious Identity Problem