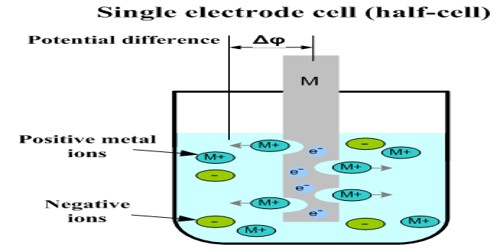 The potential of a single electrode (half-cell) cannot be measured directly because for measuring potential there has to be flow of current. It is not possible to measure the absolute potential of a single electrode because neither the oxidation nor the reduction reaction can occur by itself. For current to flow there has to be two electrodes with difference of potential between the two and these have to be correctly connected. This is similar to a situation where there will be no flow of water between two reservoirs unless there is difference in water level between the reservoirs.

The electrode potential depends upon,

To measure the potential of an electrode a cell has to be set up with two electrodes as shown in Figure. The connection between the solutions in the two electrode compartments is made with a salt bridge. A salt bridge is a doubly bent tube (as shown) containing a solution of KCl or KNO3 or NH4NO3 and closed at the two ends by cotton wool so that when inverted the solution does not fall down. The salt bridge is placed so that the liquids in the two half-cells are connected as shown for Daniel cell in Figure. The salt bridge allows the flow of ions but prevents the mixing of the different solutions. Such mixing would allow direct reaction of the cell reactants. Salt bridge is also made by placing one of the above electrolytes in a gel in the tube. The above mentioned electrolytes are used because in each case the speed of movement of the cation and the anion are almost same. 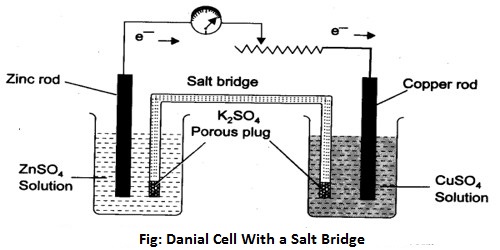 Effect of Temperature Change in terms of Le Chatelier’s Principle