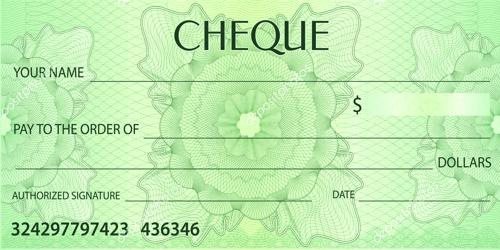 A cheque is an instrument in writing containing an unconditional order, addressed to a banker, sign by the person who has deposited money with the banker, requiring him to pay on demand a certain sum of money only to or to the order of the certain person or to the bearer of the instrument.

For the different purpose of devising requirement, there are prevailing different types of cheque Privileged in our country. These are discussed below:

(1) Bearer cheque: Bearer cheque is one by which any person or the bearers can procure money through a presentation on the bank.

(2) Crossed Cheque: Which cheque condign two prattle transverse lines or without any words across the face of a cheque is called crossed cheque.

(3) Order cheque: It there is written “or according to Order” at the end of the payee’s Name than this types cheque is called order cheque.

(4) Market cheque: Market is one by which customer can purchase products from a certain market through it. In this case, a market cheque is used to a payment of value instead of cash.

(6) Gift cheque: It is like about prize bond. A certain amount of interest is found from it after a fixed period sometimes prize also found from a lottery.

(7) Other cheques: There are not indicating that to other types, rather than from the viewpoint presentation and used them are emerging, such as –

(a) Blank cheque: It is similar to others but only the amount of money remains blank.

(b) Ante-date-cheque: If any cheque contains any future date payment than it is called Antedate-cheque.

(c) Post-date cheque: If any cheque contains a future date of payment than it called post-dated cheque.

(d) State cheque: When any cheque is issued six months ago that is six months is left over then will be called as a state cheque.

(e) Lost cheque: Which cheque is lost before presentation in the bank is called lost cheque.

Collection procedure of a Cheque