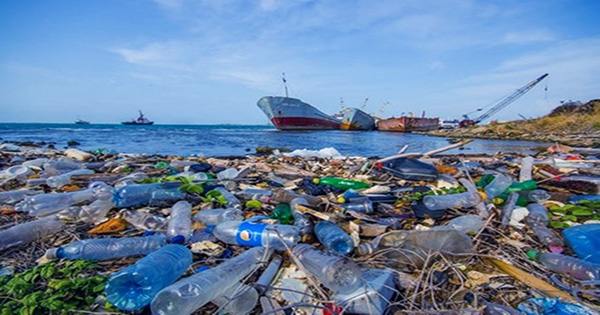 The United States enjoys living big. However, there are certain areas in which you do not wish to be the largest and finest. Take, for example, plastic pollution: Every year, 242 million megatons of the substance are dumped throughout the world, which equals almost ten billion statues of liberty. Only one country accounts for more than one-sixth of the total: the United States of America.

According to a new report from the National Academies of Sciences, Engineering, and Medicine, “The United States was the leading creator of plastic garbage in 2016.” The research was commissioned by Congress as part of the Save Our Seas 2.0 Act, which was approved in December 2020 with bipartisan support.

“Plastic trash is an environmental and social catastrophe that the United States must confront decisively from source to sea,” said Margaret Spring, chief conservation and science officer of the Monterey Bay Aquarium, who headed the report’s expert group.

“The United States’ plastic waste has a wide range of impacts, including affecting interior and coastal towns and damaging our rivers, lakes, beaches, bays, and waterways,” Spring continued. “It’s putting social and economic strains on vulnerable groups, putting marine ecosystems and wildlife in jeopardy, and poisoning seas that humans rely on for food and livelihood.”

According to the research, the United States generated “an estimated 42 [million megatons]” of plastic garbage in 2016 – more than any other country on the globe and more than the European Union’s 28 countries combined.

Americans produce roughly 130 kilograms (286.6 pounds) of plastic garbage per capita each year, which is the equivalent to each individual in the country throwing away one complete plastic Dwayne “The Rock” Johnson AND his lovely French bulldog Hobbs every year.

The vast majority of this waste is disposed of in landfills, but far too much “leaks” into the environment, according to the report – and not just because of obviously irresponsible choices like littering or shipping the equivalent of 68,000 shipping containers of trash to already-overburdened developing countries. Even adequately managed plastic garbage may end up in the environment, at a rate of one to two million megatons each year, according to the paper.

We already know the consequences: “the amount of plastic garbage dumped into the ocean might reach up to 53 [million megatons] per year by 2030,” according to the research, “nearly half of the entire weight of fish harvested from the ocean yearly.” From 2050, the ocean will have more plastic than fish, according to a 2016 estimate by the Ellen MacArthur Foundation. That is on top of the numerous species that have been found choking, suffocating, poisoned, and more because of a “global scale flood of plastic garbage virtually wherever we turn,” according to the report.

“There is a sense of urgency,” Jenna Jambeck, a member of the report’s scientific committee, told The Guardian. “As production rises, so does waste output, and so leakage affects have the potential to rise as well.” A six-point intervention plan lays out the answer – or at least the beginning of one. First, the group recommends that the United States cut plastic output, particularly non-recyclable and non-recyclable plastics. The second intervention takes this a step further, calling for the development of other materials to replace plastic, such as those that degrade faster or can be recycled or reused more readily.

Third, we must alter the sorts of plastic we use; simply put, if we use fewer single-use, throwaway items, we will throw away fewer items. The fourth intervention goal is to strengthen the country’s waste management systems, which includes infrastructure, collection, treatment, leakage control, and even accounting. The committee recommends “efforts to increase collection of plastics into waste management systems, plastic recycling, and isolation or treatment of remaining plastic [waste] to avoid leakage into the environment to avoid leakage into the environment” – in other words, recycle more and contain what we can’t recycle.

The fifth point is “waste capture.” To put it another way, we need to start picking up trash, cleaning up rivers and beaches where plastic has accumulated, and so on. The challenge of ocean clean-up will be considerably simpler if we clear garbage before it reaches the sea, as so much already does: dredging the sea is “extremely costly, inefficient, and impracticable,” according to the research.

Finally, we arrive at point six, the most basic of all. Point six demands for “minimizing at-sea disposal” of plastic waste — in other words, litterbugs, stop throwing rubbish into the water! Of course, these things are easier said than done, and when dealing with an issue of this scope and complexity – and the “grossly inadequate” infrastructure in place to deal with it – the study makes it apparent that “no one solution will be sufficient to address the situation.” Nonetheless, the committee claims that the US could play a leading role in the global battle against plastic pollution, impacting global innovation, manufacturing, and economics, based on this week’s report’s “scientifically robust” vision.

According to a news statement from the National Academies, “the report proposes that the United States develop a cohesive, comprehensive, and crosscutting government policy and research approach to minimize its contribution of plastic debris to the environment and ocean.”