Home Physics What is Periodic motion and Harmonic Motion? 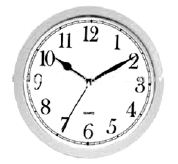 If a body executing periodic motion moves in a definite direction for one half of its time period and exactly for the other half in the opposite direction then this motion is called oscillatory or harmonic motion. If any spring is hung from a strong support and an object is attached at the lower end and released after stretching, the spring will vibrate up and down. This type of motion is known as oscillatory or harmonic or vibratory motion. The motion of a simple pendulum and motion of a vibrating tuning fork is harmonic motion.