Home Other A Liar Shepherd 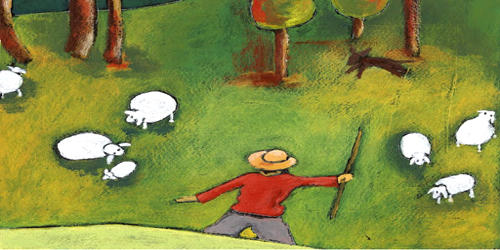 There lived a shepherd boy in a certain village. He used to graze a flock of sheep near a forest. It was not very far from his village. Besides his usual duty, he sang and played the flute.

But the boy had a bad habit. He used to tell a lie on the slightest excuse. He also used to make fun by telling lies. One day he wanted to make fun with the villagers. The villagers knew him well. They were simple and very helpful. They used to help others in times of danger. One day, the shepherd boy began to shout, “Wolf! Wolf! Help! Help!” The villagers heard his cry and ran to help him. But when they came near him, they found no wolf there; and the boy laughed at them. In this way, the boy befooled the villagers. The villagers became very angry about this. They did not punish him but warned him not to do it again. A few days later, the shepherd boy again made the same fun. The villagers came again to help him but found no wolf there. They felt very much bored. They rebuked him but the boy did not pay heed to them and kept laughing. At the time of their departure, they said. “If you cry out for help again, we will not come because you are a liar.”

One day at the afternoon, while the boy was grazing the sheep in the field, suddenly he saw that a wolf really fell upon his sheep and began to kill them. The boy became very afraid and shouted, “Wolf! Wolf! Help! Help! A wolf is in my sheep! Come and help me!” The villagers heard him but they thought it to be his new fun. Nobody came to help him. The wolf not only feasted on the sheep but also killed the shepherd. Afterward, when his dead body was found, the villagers kept saying for a time being, “If he didn’t tell lies, we would respond his cry, and perhaps he might avoid the danger.” So, we should always speak the truth and it is very unwise to make fun by telling lies.

The moral of the story is “Nobody believes a liar.” If you keep lying, no one will believe you even if you are speaking the truth. Always speak the truth. So, do not like to lie to other people, because if you lie, then others will become not believe in our words.