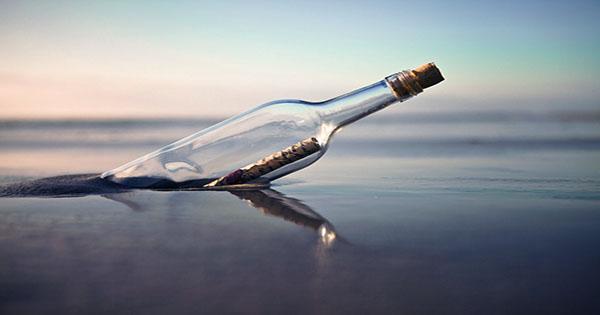 A message in a bottle that was dropped into the water by a Japanese high school’s science club 37 years ago has been discovered in Hawaii.

The bottle’s 6,400-kilometer (4,000-mile) voyage across the Pacific came to an end in July when it was discovered by 9-year-old Abbie Graham on a beach near Keaau, according to the Hawaii Tribune-Herald. She unscrewed the rusted cap to find an old note with the words “THE OCEAN CURRENT INVESTIGATION” printed in English, Japanese, and Spanish. Further investigation found that the bottle was put into the water in 1984 as part of an initiative by the Chiba Prefectural Choshi High School Natural Science Club to study ocean currents.

If you’re curious about the fragrance of a seafaring bottle after 37 years of bopping around in the Pacific, Abbie claims it smelled like a “wet cat.”

According to the note, the finder should report the discovery to the high school in Japan, along with the date and coordinates of its discovery. Abbie and her family used the internet and social media to look for the school, but all of the information was in Japanese, which they didn’t understand. They eventually just laminated the message and mailed it back to the address on the note.

According to the Japanese publication Mainichi, the message has returned home and is secure in the hands of Choshi High School. Students have written an English letter to the girl who found the bottle as a gesture of gratitude, thanking her for taking the time to contact them. Since 1985, the bottles have been discovered in 17 various areas around Japan, the Philippines, China, and even the United States’ west coast. The last bottle was discovered in 2002 on Kikaijima Island in Kagoshima Prefecture, which is located in southwest Japan. Until the school received a very shocking message from Hawaii, it was supposed that all bottles had been discovered or lost to the sea.

“We assumed the final one had been discovered in Kikaijima.” According to Mainichi, Jun Hayashi, the school’s Vice-principal, said, “We never anticipated another would be unearthed 37 years later.”

In total, the science club released 750 bottles into the ocean in July 1984 and 1985 to study the passage of the Kuroshio Circulation, a warm ocean current that passes through Japan on its way to the west in the North Pacific Ocean.