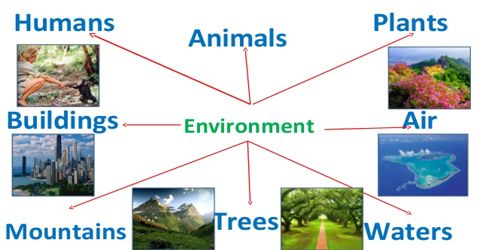 It must be recognized that all sectors of our society viz., industry, government, agriculture, mining, energy, transportation, construction, and consumers generate waste. Wastes contain pollutants which are the materials of chemicals that have been discarded during the process of production or consumption. Among the various sources of pollution, industry is a major generator of waste in terms of both its quantity and toxicity. Business activities such as production, distribution, transport, storage, consumption of goods and services are known to be the most critical sources of environmental pollution problems.

Many business enterprises have been responsible for causing (i) air, (ii) water (iii) land, and (iv) noise pollution. These types of pollution are discussed as follows:

(i) Air pollution: Air pollution is the result of a combination of factors which lowers the air quality. It is mainly due to carbon monoxide emitted by automobiles which contributes to air pollution. Similarly, smoke and other chemicals from manufacturing plants pollute the air. Resultant air pollution has created a hole in the ozone layer leading to dangerous warming of the earth.

(ii) Water pollution: Water becomes polluted primarily from chemical and waste dumping. For years, business enterprises have been dumping waste into rivers, streams and lakes with little regard for the consequences. Water pollution has led to the death of several animals and posed a serious threat to human life.

(iii) Land pollution: Dumping of toxic wastes on land causes land pollution. This damages the quality of land making it unfit for agriculture or plantation. Restoring the quality of the land that has already been damaged is a big problem.

(iv) Noise pollution: Noise caused by the running of factories and vehicles is not merely a source of annoyance but is also a serious health hazard. Noise pollution can be responsible for many diseases like loss of hearing, malfunctioning of the heart and mental disorder.