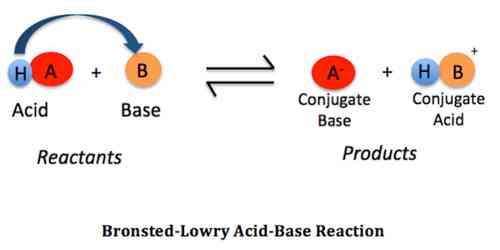 An acid is a substance – a molecule or an ion – which can donate a proton.

A base is a substance – a molecule or an ion – which can accept a proton.

A proton is a hydrogen atom which has lost its electron. An acid ‘A’ ionizes as- 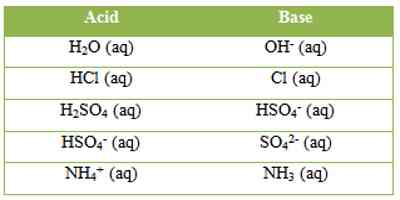 It may be seen that according to this concept a base or an acid may be a neutral molecule or an ion. Hydrogen chloride acts as an acid in solution because it can donate a proton. If the solvent is water H+ ion forms the hydronium ion, H3O+. Water here acts as a proton acceptor, a base. This can be represented as-

Ammonia in water acts as a base because it can accept a proton from water. As a result an OH– ion is produced,

Note that depending on the relative proton donating and proton accepting ability the same compound, such as water in the two examples given above, can act either as acid or as a base.

The Bronsted – Lowry concept may also be applied to reaction between HCl and NH3, both dissolved in benzene. In benzene none of these two compounds are ionized. They react, however, to form NH4Cl.