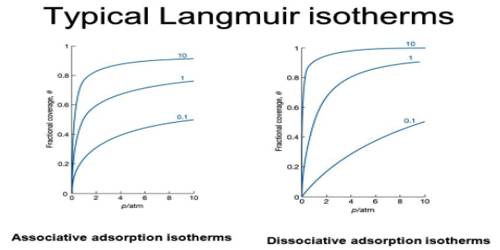 A plot of the volume of gas adsorbed against equilibrium pressure is shown in Figure. Initially, the volume adsorbed rapidly rises with an increase in pressure and then levels off showing that volume of gas adsorbed increases only very slightly with pressure. The three curves refer to experimental data at three temperatures, graph #1 is for the lowest temperature, and the graph # 3 is for the highest of the three temperatures. Each of these curves is called an isotherm. 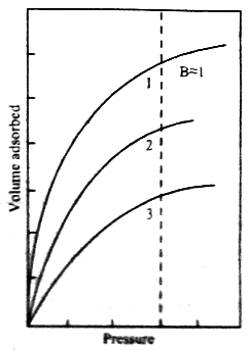 Fig: Schematic representation of isotherm (schematic) at the different temperature, 1, 2 and 3 are in increasing order of temperature.

Langmuir isotherm is the classic isotherm of a reaction leading to the formation of a 1:1 stoichiometry complex, e.g., between a sorption site and a molecule or ion. Langmuir derived a linear relation between gas pressure and the amount (volume) of the gas adsorbed at a constant temperature. The relation is also called an isotherm. The derivation is based on the following assumptions:

(i) the adsorbed gas behaves ideally in the vapor phase,

(ii) the adsorbed gas forms a unimolecular layer on the surface of the adsorbent,

(iii) there is no lateral interaction between the adsorbate molecules,

(iv) the adsorbed molecules are localized, that is, then do not move around on the surface,

(v) the surface on which adsorption takes place is homogeneous, i.e., all points on the surface have equal and identical residual field of force.