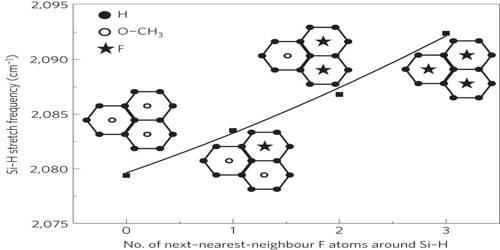 The atoms or molecules on a surface of a liquid or solid are subjected to unbalanced forces due to their positions. A molecule in the interior of a solid body or a liquid experiences an intermolecular force of equal magnitude in all directions. The resultant force on this particular molecule is, therefore, zero. But the condition of the molecules on the surface is different as they are pulled downwards and sideways but no forces act on them from above as shown in Figure. 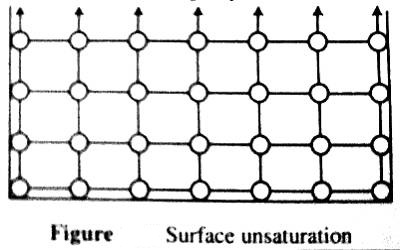 As a result, there remains a residual field of force acting only on the surface. These unbalanced forces on the surface molecules give rise to surface tension in liquids.

In solids, due to rather fixed positions of the molecules or atoms, the exact nature and magnitude of the unbalanced forces are different from those in liquids, thus imparting some special properties to solid surfaces. The unsatisfied combining capacities associated with surface atoms or molecules render them particularly reactive towards any other material body, especially liquids and gases when the latter happen to come near the field of force. At the first available opportunity, these surface atoms molecules will try to satisfy the ‘unsaturation’ by ‘capturing’ other molecules or atoms.

The extent of such capture or adsorption will depend on,

(i) the nature of the surface forces.

(ii) the nature of the molecules captured and

The temperature of the system will have an effect since the ‘escaping tendency’ of the captured molecules will be greatly influenced by the thermal motion. The concentration or the pressure of a gas will modify the amount of adsorbed gas because of the change in the number of molecules per unit volume with change of pressure. If the adsorption is exothermic (i.e., evolution of heat) rise of temperature will reduce the amount of adsorbed species as in physical adsorption. If, however, there is chemical interaction, the rise of temperature will increase adsorption. This is according to the principle of mobile equilibrium. In practice both the processes arc exothermic but the quantity of heat involved varies widely. As a matter of fact, this thermal effect is utilized to differentiate between different types of adsorption.surface tension