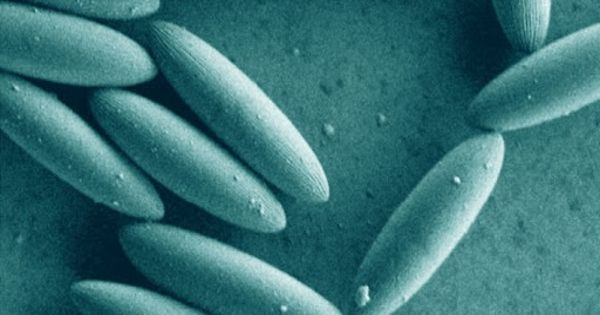 Physicists have discovered a new state of matter that is hidden within the mysterious transformations that occur between the liquid and solid states of glass. A team of scientists from Germany and the Netherlands discovered, using confocal microscopy, that suspensions of ellipsoidal colloids form an unexpected state of matter, a liquid glass, in which individual particles can move but cannot rotate.

Glass is a truly unique material. Despite the fact that it is a solid, its constituents are not organized in a nice crystalline structure like other solids. Its molecules become stuck in place before they can organize into a crystal. In their quest to understand glass, scientists discovered a new state of matter: liquid glass.

Liquid glass was created by combining particles that could flow but not rotate. This new state, as reported in the Proceedings of the National Academy of Sciences, provides insight into how regular glass might form.

Liquid glass was created with particles that were able to flow, but couldn’t rotate. As reported in the Proceedings of the National Academy of Sciences, this new state gives insight into how regular glass might form.

Colloids contain liquid glass because one substance is dispersed through another, but neither substance can separate or settle like in solutions or suspensions. When certain colloids become dense enough, their structure is messed up and they become glassy. It will remain that way until the structure is reorganized.

The use of colloids, which are mixtures of “large” particles dispersed through a second substance, was the starting point for this investigation. Colloids include gels and emulsions. Because these substances can experience many of the phenomena that occur in glass-forming materials, they are an excellent proxy for studying these glass transitions.

The researchers in this study decided to try something different than previous studies. Instead of spherical particles, they created elliptical (egg-shaped) particles for their colloid. They discovered the unusual liquid glass behavior by varying the concentration of these in the mixtures.

“Our particles have orientation – as opposed to spherical particles – which gives rise to entirely new and previously unstudied kinds of complex behaviors,” said senior author Professor Andreas Zumbusch of the University of Konstanz in a statement. “At certain particle densities, orientational motion froze while translational motion continued, resulting in glassy states in which particles clustered to form local structures with similar orientation.”

The researchers observed two competing glass transitions in this particular substance. One was a reversible regular phase transformation. The other was an irreversible non-equilibrium one. This combination may be responsible for glass’s unusual properties.

“From a theoretical standpoint, this is incredibly interesting,” says Dr. Matthias Fuchs, professor of soft condensed matter theory at the University of Konstanz and the paper’s other senior author. “Our experiments provide the kind of evidence for the interaction between critical fluctuations and glassy arrest that the scientific community has been seeking for a long time.”

Understanding glass entails more than just the material used to make our windows. A wide range of materials, including plastics and metals, as well as organic substances such as proteins and biological cells, behave similarly to glass. For the past two decades, theoretical studies of liquid glass have been conducted. This first finding will have far-reaching implications in the field of material science.

This is not to say that crystal formation is doomed. Liquid glass will only last as long as the particles in the colloid stick together and form clusters, getting in each other’s way. When particles have enough energy to rotate again, as well as the proper pressure and volume, they transition from a liquid glass state to a liquid crystal as they begin to rearrange themselves in the proper order.

“The liquid glass state may provide the long-desired paradigm in which the interplay between equilibrium critical correlations and critical slowing down versus glass formation can be studied microscopically,” Fuchs and Zumbusch wrote.