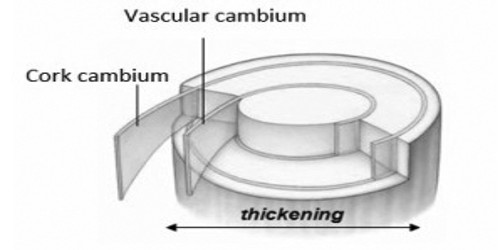 (i) The secondary vascular tissues formed in the plant body due to intra-stelar secondary growth create centrifugal pressure.

(ii) The rate of pressure is also increased, consequently with the progress of secondary growth. Due to the formation of secondary tissues in the intra-stelar region extensive pressure is exerted on the epidermis which becomes stretched and tends to rupture.

(iii) Due to this pressure epidermis may be broken down. New phellogen may be formed in the deep-seated layers of the cortex which also behaves in the same manner.

(iv) Moreover, the influence of this pressure may fall on the hypodermis and cortex. To prevent that a new meristem, called cork-cambium or phellogen, is produced on the superficial layers of the cortex.

(v) Cork-cambium cells divide as usual forming parenchymatous phelloderm or secondary cortex on the inner side and cork cells or phellem on the outer side. Cork cells are brick-shaped ones that lose protoplasm and their walls are suberised.

(vi) These suberised cork cells provide as secondary protective tissues. But as they are impermeable to water, the cells lying outside the cork do not get any supply of food. They eventually die and dry up to form what is known as bark. A continuous bark is called ring bark; but if the bark is created in patches, as in guava, it is called scale bark.