Systematic position in plant classification: Helminthosporium is a fungus of the phylum-Deuteromycota, under the class- Deuteromycetes They are known as incomplete fungus.

Habitat: They live as parasites, in the leaf cells of different crops, such as paddy, wheat, burly etc.

iii) At the matured stage, conidia spread into other plants breaking up the sporangia and germinate in favorable condition to form new plants. 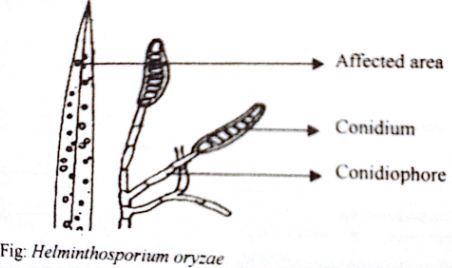 Reproduction: They reproduce by asexual method. As sexual reproduction is absent in them, they are called incomplete fungus.

i) Few species of them cause diseases in paddy, such as —leaf spots, stem rot etc. which reduce the overall production.

Draw a Labelled Diagram of Gametophyte of Moss

Characteristics of Pteridophyta or Tracheophyta