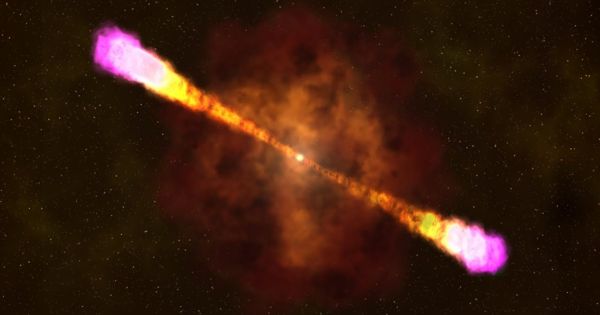 An international team of scientists led by astrophysicists from the University of Bath in the United Kingdom measured the magnetic field in a distant Gamma-Ray Burst, confirming for the first time a decades-long theoretical prediction that the magnetic field in these blast waves becomes scrambled after the ejected material crashes into and shocks the surrounding medium.

When massive stars (at least 40 times the size of our Sun) die in a catastrophic explosion that powers a blast wave, black holes form. These extremely energetic events eject material at near-light speeds, producing bright, short-lived gamma-ray flashes that can be detected by satellites orbiting the Earth – hence the name Gamma-Ray Bursts (GRBs).

Astrophysicists find the magnetic field in gamma-ray bursts is scrambled after the ejected material crashes into, and shocks, the surrounding medium.

Professor Carole Mundell, Head of Astrophysics at Bath and a gamma-ray expert, stated: “We measured polarisation, a special property of light, to directly probe the physical properties of the magnetic field driving the explosion. This is a fantastic result that solves a long-standing puzzle of these extreme cosmic blasts, which I’ve been researching for a long time.”

The goal is to capture light as soon as possible after a burst and decode the physics of the explosion, with the prediction that any primordial magnetic fields will be destroyed as the expanding shock front collides with the surrounding stellar debris.

When the large-scale primordial field is still intact and driving the outflow, this model predicts light with high levels of polarisation (>10 percent) shortly after the burst. Later, as the field is scrambled in the collision, the light should be mostly unpolarised.

Mundell’s team was the first to detect highly polarised light minutes after the burst, confirming the presence of primordial fields with large-scale structure. However, the picture for expanding forward shocks has proven to be more contentious.

Teams that observed GRBs in slower time — hours to a day after a burst — discovered low polarisation and concluded that the fields had been destroyed long ago, but they couldn’t say when or how. In contrast, a group of Japanese astronomers announced the discovery of 10% polarised light in a GRB, which they interpreted as a polarised forward shock with long-lasting ordered magnetic fields.

Nuria Jordana-Mitjans, a Bath PhD student who led the new study, stated: “Because they probed very different timescales and physics, these rare observations were difficult to compare. In the standard model, there was no way to reconcile them.” For more than a decade, the mystery remained unsolved until the Bath team’s analysis of GRB 141220A.

Professor Mundell’s team reports the discovery of very low polarisation in forward-shock light detected just 90 seconds after the blast of GRB 141220A in a new paper published today in the Monthly Notices of the Royal Astronomical Society. The team’s intelligent software on the fully autonomous robotic Liverpool Telescope and the novel RINGO3 polarimeter — the instrument that logged the GRB’s color, brightness, polarisation, and rate of fade — enabled the super-fast observations. Using this data, the team was able to demonstrate:

“This new study builds on our research that has shown the most powerful GRBs can be powered by large-scale ordered magnetic fields, but only the fastest telescopes will catch a glimpse of their characteristic polarisation signal before they are lost to the blast,” Ms Jordana-Mitjans said.

“We now need to push the boundaries of technology to probe the earliest moments of these blasts, capture statistically significant numbers of bursts for polarisation studies, and put our research into the broader context of real-time multi-messenger follow-up of the extreme Universe,” Professor Mundell added.

Discovering the Truth about the Earth’s First Mass Extinction