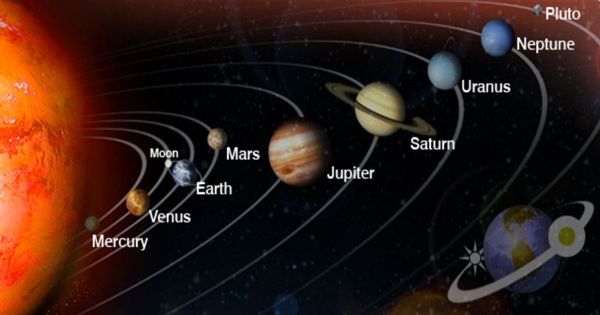 Astronomers use the word conjunction to describe meetings of planets and other objects on our sky’s dome. One of the more annoying things about solar systems is planets and other objects don’t stay in one place or even in one orbit. They use the term great conjunction to describe meetings of Jupiter and Saturn, the two biggest worlds in our solar system. New work led by Carnegie’s Matt Clement reveals the likely original locations of Saturn and Jupiter. These findings refine our understanding of the forces that determined our Solar System’s unusual architecture, including the ejection of an additional planet between Saturn and Uranus, ensuring that only small, rocky planets, like Earth, formed inward of Jupiter. The next great conjunction of Jupiter and Saturn will be December 21, 2020. It’ll be the first Jupiter-Saturn conjunction since the year 2000, and the closest Jupiter-Saturn conjunction since the year 1623! At their closest, Jupiter and Saturn will be only 0.1 degrees apart. That’s just 1/5 of a full moon diameter.

“These findings refine our understanding of the forces that determined our Solar System’s unusual architecture, including the ejection of an additional planet between Saturn and Uranus, ensuring that only small, rocky planets, like Earth, formed inward of Jupiter.”

In its youth, our Sun was surrounded by a rotating disk of gas and dust from which the planets were born. We’d love to understand the history of our solar system, but the only way to do this is to measure where things are now and how they are moving and to then work backward and try and figure out what happened. The orbits of early formed planets were thought to be initially close-packed and circular, but gravitational interactions between the larger objects perturbed the arrangement and caused the baby giant planets to rapidly reshuffle, creating the configuration we see today. A good model will explain details like the Great Heavy Bombardment, when asteroids careened into every solid surface we can see. It will also explain how Uranus and Neptune ended up so far from the sun. 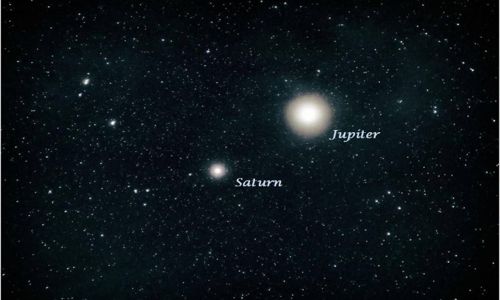 “We now know that there are thousands of planetary systems in our Milky Way galaxy alone,” Clement said. “But it turns out that the arrangement of planets in our own Solar System is highly unusual, so we are using models to reverse engineer and replicate its formative processes. This is a bit like trying to figure out what happened in a car crash after the fact — how fast were the cars going, in what directions, and so on.”

As computers get better, scientists can include more and more details in their models, better-approximating reality. In new models published by Matt Clement and collaborators, they ran 6000 simulations of our solar system’s evolution and realized the relationship between Saturn and Jupiter likely wasn’t what we thought it was. Clement and his co-authors — Carnegie’s John Chambers, Sean Raymond of the University of Bordeaux, Nathan Kaib of the University of Oklahoma, Rogerio Deienno of the Southwest Research Institute, and André Izidoro of Rice University — conducted 6,000 simulations of our Solar System’s evolution, revealing an unexpected detail about Jupiter and Saturn’s original relationship.

Jupiter in its infancy was thought to orbit the Sun three times for every two orbits that Saturn completed. But this arrangement is not able to satisfactorily explain the configuration of the giant planets that we see today. The team’s models showed that a ratio of two Jupiter orbits to one Saturnian orbit more consistently produced results that look like our familiar planetary architecture. Prior work indicated clearly that these two worlds were once in resonance, with the two planets orbiting so that they lined up over and over with the sun in the same place. It was thought this was a three to two resonance, with Jupiter orbiting three times for every two orbits of Saturn.

“This indicates that while our Solar System is a bit of an oddball, it wasn’t always the case,” explained Clement, who is presenting the team’s work at the American Astronomical Society’s Division for Planetary Sciences virtual meeting today. “What’s more, now that we’ve established the effectiveness of this model, we can use it to help us look at the formation of the terrestrial planets, including our own, and to perhaps inform our ability to look for similar systems elsewhere that could have the potential to host life.”

Saturn, the sixth planet outward from the sun, is the farthest and slowest-moving planet that we can easily see with the eye alone. Dazzling Jupiter, the fifth planet outward from the sun, is the second-slowest bright planet, after Saturn. For that reason, Jupiter/Saturn conjunctions are the rarest of bright-planet conjunctions, by virtue of their slow motions in front of the constellations of the zodiac. Saturn takes nearly 30 years to go around the sun full circle whereas Jupiter takes nearly 12 years. Thus, every 20 years, Jupiter catches up to Saturn as viewed from Earth.

Opinion: The James Webb Space Telescope And Why The Bigoted Legacy Of Its Namesake Matters

All systems go buy your pass to Space 2021