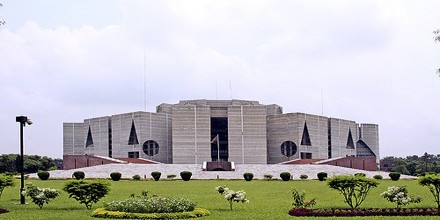 The height of the building is 155 ft; it is situated at Sher-e-Bangla Nagar in Dhaka. It was inaugurated in 1982. The artificial lake that surrounds the Sangsad Bhaban is called the Crescent Lake. There are 430 seats for the spectators. Louis I Kahn was born in America.

The Parliament House of Bangladesh is one of the largest and spectacular parliament buildings in the world. The building is surrounded by a take that has increased the beauty of the building. The length, windows, corridors, ventilators etc spell bound the viewers. Because of its mammoth structure its annual maintenance cost is too high. It was inaugurated for use in the year 1982.