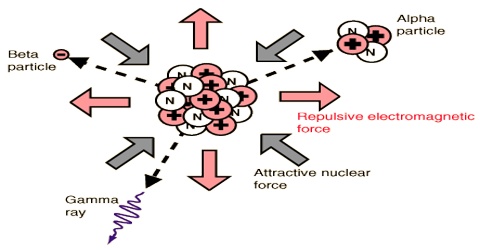 The strong nuclear force is one of the four fundamental forces in nature; the other three are gravity, electromagnetism and the weak force. The strong force is the force that holds the nucleus of the atom together, even though other forces want to pull it apart. The electrostatic repulsion, part of the electromagnetic force, between the positive protons in the nucleus is very powerful.

Nucleus of an atom is composed of protons and neutrons. These are combinedly celled nucleon. In the nucleus protons having similar charges stay very close to each other, so a strong Coulomb’s repulsive force is active there which could break away the nucleus but in practice most of the nuclei are stable. If a proton or neutron can get closer than this distance to another nucleon, the exchange of mesons can occur, and the particles will stick to each other. If they can’t get that close, the strong force is too weak to make them stick together, and other competing forces (usually the electromagnetic force) can influence the particles to move apart. Gravitational force acting between nucleons is so weak that it cannot balance the Coulomb’s force. So, there must be a strong force active that keeps the nucleus as it is. This force is called strong nuclear force. Scientists believe that there is one type particles called meson inside nucleons by whose mutual exchange this force becomes active. This force is attractive and is not active outside the nucleus: i.e., this force is short range force.