The “big five” are broad categories of personality traits. While there is a significant body of literature supporting this five-factor model of personality, researchers don’t always agree on the exact labels for each dimension. However, these five categories are usually described as follows: 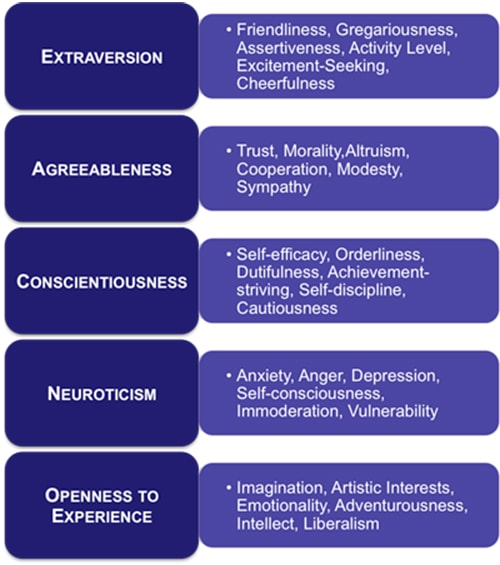 This personality dimension includes attributes such as trust, altruism, kindness, affection and other prosaically behaviors. People who are high in agreeableness tend to be more cooperative while those low in this trait tend to be more competitive and even manipulative.

Standard features of this dimension include high levels of thoughtfulness, with good impulse control and goal-directed behaviors. Those high on conscientiousness tend to be organized and mindful of details.

This trait features characteristics such as imagination and insight, and those high in this trait also tend to have a broad range of interests.

People who are high in this trait tend to be more adventurous and creative. People low in this trait are often much more traditional and may struggle with abstract thinking.

Difference between Type A and Type B Personality