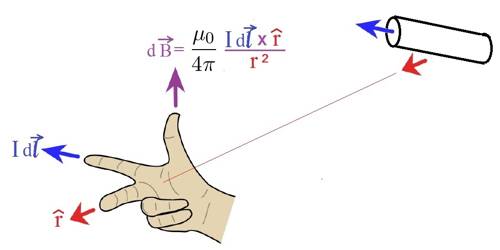 Scientist Oersted discovered that there exists a magnetic field around a wire carrying current. To determine the magnetic induction or magnetic intensity of this magnetic field, scientist Laplace gave a theory or law. It is called Laplace’s theorem or

Later on, in 1820 scientists Biot and Savart gave an experimental proof of this law. Hence, it is called Biot-Savart’s Law. This law is applied to the generation of a magnetic field due to conductors of any shape and different current distributions. The law is stated below.

Law: The magnitude of magnetic field at a point produced around a conductor of small length due to the flow of current through it is-

(i) directly proportional to the amount of current.

(ii) directly proportional to the length of the conductor.

(iv) inversely proportional to the distance between the point and the mid-point of the conductor.

The Biot-Savart Law is an equation that describes the magnetic field created by a current-carrying wire and allows you to calculate its strength at various points.