You are here: Home Chemistry How Extraction of Copper from Copper Pyrites?

The method used to extract copper from its ores depends on the nature of the ore. Sulphide ores such as chalcopyrite are converted to copper by a dissimilar method from silicate, carbonate or sulphate ores.

The ore is crushed and then concentrated by froth floatation process. The ore obtained from mines are broken down into little piece by jaw crusher and then pulverized. The ore being sulphide ore is concentrated by froth floatation procedure. Ore forms froth with pine oil and come to the surface and are skimmed off though impurities are left in water.

Sulphur, phosphorus, arsenic, and antimony which are present as an impurity are removed as volatile oxides.

The copper pyrite is partly converted into sulphides of copper and iron.

The Process in summary:

The concentrated ore is heated stoutly with silicon dioxide (silica) and air or oxygen in a furnace or series of furnaces. 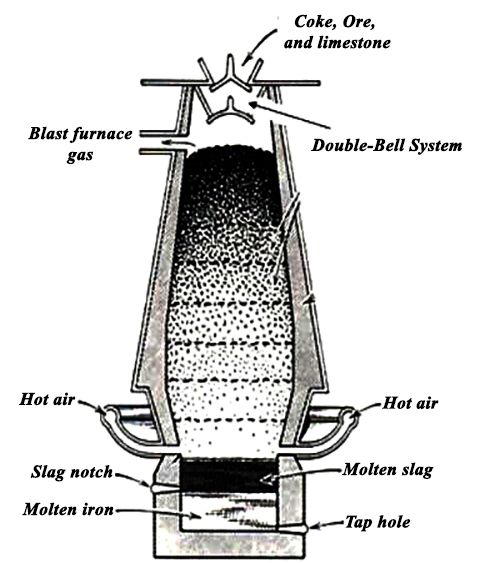 The roasted ore is mixed with powdered coke and sand and is heated in a blast furnace. It is made of steel plates lined inside with fire clay bricks. Hot air at 800°C is introduced from the tuyers near the base of the furnace. As a result, the following changes occur.

As a result of smelting, two separate molten layers are formed at the bottom of the furnace. The upper layer consists of slag and is removed as a waste while the lower layer is called matte. It chiefly consists of cuprous sulphide and some unchanged ferrous sulphide.

Refining: Blister copper contains about 2% of impurities and it is purified by electrolytic refining.