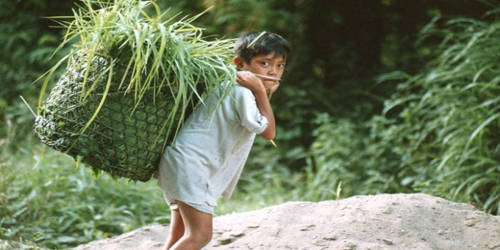 The labor done by a child is called child labor. It means indulging the children in arduous labor which affects their physical and mental development and exploiting their potential to grow up with dignity. It is one of the biggest problems around the world because it puts children in danger. Child labor usually means work that is done by children under the age of 15, which restricts or damages their physical, emotional, intellectual, social, or spiritual growth as children. The children of poor families, the street children, and the orphans are the victims of it. Many of them beg. Many break bricks. Some clean plastic materials, torn shoes, torn paper, etc. They are used for smuggling and the supply of drugs. Thus they struggle to live. The working children are deprived of all basic rights. They abused in their growing period. This abuse may be physical, mental or sexual denying the children of their rights of basic education.

There are many causes behind child labor. Lack of social security, hunger and poverty are the fundamental drivers of this problem. The first and foremost cause is a huge population. The next cause is poverty. This problem is increasing in many countries that are because of poverty and other issues, but poverty is the most common reason for causing child labor. Another cause is the negligence of some parents. Parents are one of the causes of child labor, especially illiterate parents. These parents leave their children on the streets. Some parents are not able to work so they force their children to work instead of them. Illegal relations and social unrest are also responsible. Hence, children are more easily employed because they get less money paid than adults and they are easier to get abused. The effects of child labor are many. Physical, sexual or emotional abuse can leave a severe impact on the child for years. It shows that the country is not a civilized one. However, the Industrial Revolution increased the use of child labor in the world. For child labor, the country is lagging behind.

Today’s children are the future of the nation. If they are not educated, there will be no hope for us. Snatching and smuggling are also increasing for them. The government should make stricter laws to eradicate child labor. Our population must be controlled first to check the problem. Poverty must be alleviated. NGOs should pitch into these avenues and empower these children to a brighter future. The working children must be taken back to education.  Strict implementation of work laws is additionally a basic requirement with the end goal to counteract abuse by organizations. They must be rehabilitated. Public awareness is also necessary.