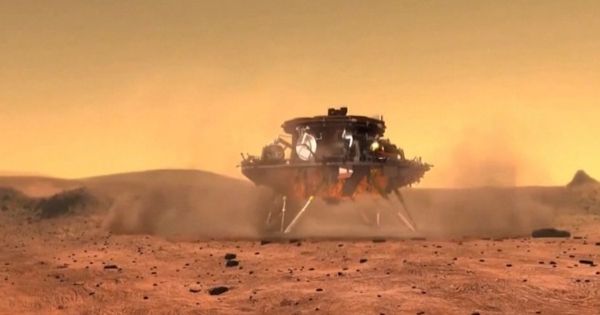 The Mars probe and rover will spend three months taking photos, collecting geographical data, and collecting and analyzing rock samples. According to the state-run Xinhua news agency, China’s Mars rover drove from its landing platform and began exploring the surface, making the country only the second nation to land and operate a rover on the Red Planet.

The Tianwen-1 Mars probe, which carried the Zhurong rover, was launched last July, marking a significant milestone in China’s space program. Tianwen-1 landed on the Utopia Planitia, a vast northern lava plain, and returned its first photos of the surface a few days later.

China’s Mars rover drove from its landing platform and began exploring the surface, state-run Xinhua news agency said, making the country only the second nation to land and operate a rover on the Red Planet.

China has now launched astronauts into space, sent probes to the Moon, and landed a rover on Mars—the most prestigious prize in the race for space dominance. The United States also has a Mars mission in progress, with the Perseverance rover and a tiny helicopter exploring the planet. NASA anticipates that the rover will collect its first sample in July and will return to Earth as early as 2031.

Only the United States and Russia have landed on Mars, and only the former has operated a rover on the planet’s surface. Several previous attempts by the US, Russia, and Europe to land rovers on Mars have failed, most recently in 2016 with the crash-landing of the Schiaparelli joint Russian-European spacecraft.

The most recent successful landing occurred in February, when the US space agency NASA successfully landed its rover Perseverance, which has since been exploring the planet. The United States rover launched a small robotic helicopter on Mars, making it the first powered flight on another planet.

China has grandiose space plans, including the launch of a crewed orbital station and the landing of a human on the moon. China became the first country to land a space probe on the moon’s little-explored far side in 2019, and returned lunar rocks to Earth for the first time since the 1970s in December.

That drew criticism from the United States and other countries as a violation of etiquette governing the return of space debris to Earth, with officials claiming the remnants posed a risk to life and property.

NASA Administrator Bill Nelson warned Congress this week, holding up a photo taken by China’s Mars lander, that his agency faces increasing stiff competition on the high frontier and that sustained funding for a new moon lander, infrastructure upgrades, and other critical programs is critical for America’s space program.

Nelson, a former lawmaker who flew aboard a space shuttle in 1986, told a House appropriations subcommittee in his first congressional appearance since being confirmed by the Senate that China plans to send multiple landers to the south pole of the moon in the not-too-distant future, the same area NASA is targeting with its Artemis program.