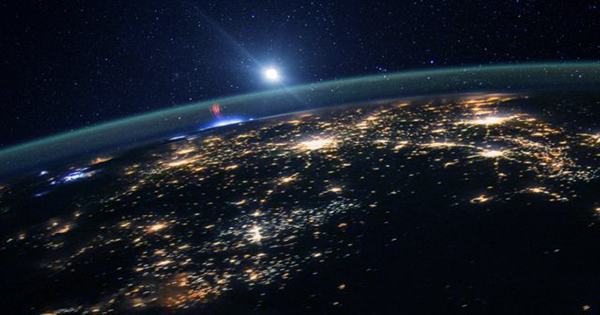 While the International Space Station (ISS) traveled above Italy, European Space Agency astronaut Thomas Pesquet took a magnificent photo of the Earth at night. However, “lo stivale” – Italy’s “boot” – is not the most intriguing aspect. A rare transient luminous event (TLE) in the atmosphere can see in the distance. TLEs are a sort of colorful upper-atmosphere lighting that comes in a variety of colors. The event could have been a rare blue jet or blue glimpse, based on the hue of this one. Lightning-like electrical discharges shoot up to 50 kilometers (30 miles) into the stratosphere from the tops of thunderclouds and last milliseconds.

Because of the storm clouds and our atmosphere, they are frequently difficult to observe from Earth. The Atmosphere-Space Interactions Monitor (ASIM) on the International Space Station, on the other hand, records the most unusual electrical events that occur high above the clouds. Over the years, it has witnessed some spectacular happenings.

“This is a very rare occurrence, and we have a facility dedicated to detecting these light flashes outside Europe’s Columbus laboratory.”Because it flies over the equator, where there are more thunderstorms,” Pesquet stated in the photo’s caption, “the Space Station is exceptionally well suited for this observatory.”

“My friend Andreas Mogensen has a significant role in this story; he was the first to capture them from orbit (in only 10 days on the Space Station, legend!), demonstrating the value of having a capability to track the flashes!”

For decades, there was little evidence to back up these TLE episodes. There were a few anecdotal accounts from pilots, but scientists did not have much to rely on. We now know that a variety of odd varieties of lightning, such as jets, sprites, and elves, exist. Using the International Space Station to investigate the upper atmosphere has allowed us to collect fantastic data that will help us better understand this hitherto unknown aspect of thunderstorms. We have even observed them having fun in other worlds.

“What’s remarkable about this lightning is that it was noticed anecdotally by pilots just a few decades ago, and scientists were not persuaded they genuinely existed,” Pesquet said on Flickr. “Fast forward a few years, and we can affirm that elves and sprites exist and that they may be impacting our climate as well!” The photograph by Pesquet is a single frame from a time-lapse video recorded from the station. The image would be stunning even if it did not include the Earth’s curve and the dazzling lights of Europe below. It has taken to the next level by capturing a fleeting light event at its peak.