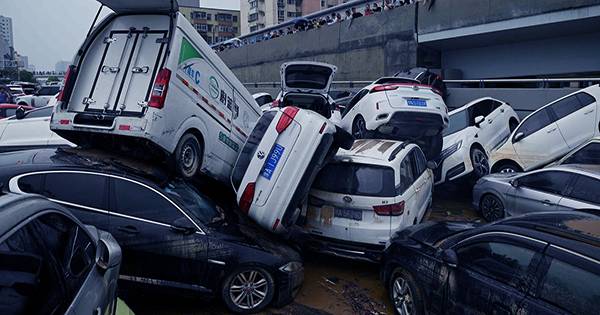 July 2021 can be remembered as the month of deadly floods around the world. Unprecedented rainfall has caused floods across Europe, with Germany and Belgium particularly badly affected. Mumbai has witnessed heavy floods and landslides. Similar stories are being published from Iran, the United States, Nigeria, Colombia, and New Zealand. The latest news came from China’s Henan province, where more than a year’s worth of rain fell in just three days, leading to flooding in the province’s capital, Jingzhou. Authorities say at least 25 people have been killed and more than 200,000 have been evacuated.

Heavy rains during the day caused roads to collapse and flooded the city’s subway system. It is believed that 12 people died in the flooded subway tunnels. The videos, posted on social media, show hundreds of cars floating on the road, as well as a series of rescue workers, where roads have been paved and waterfalls have been created. There are also concerns about the stability of the Ehetan Dam in the province. Authorities said heavy rainfall caused the dam to break 20 meters (65.6 feet) and is at risk of collapse.

Troops were dispatched to carry out emergency explosions and flood relief. The more common occurrences of exceptional rainfall and other extreme weather events are the result of the climate crisis, which has been preceded by human emissions of carbon dioxide since the Industrial Revolution. The last few weeks have again shown that prevention and mitigation need to improve.

Climate change is a global problem that could and does affect everyone on this planet, although the most vulnerable groups in the world, wherever they are, are under pressure. Days of torrential rain and massive flooding have hit China’s Henan province, bursting riverbanks, waterlogged dams, and public transport systems, and forcing thousands of people to evacuate their homes.

At least 25 people have been killed and seven are missing in the provincial capital, Chengzhou. Provincial authorities have issued weather warnings at their highest level. One year’s worth of rain – 640 mm – fell in just three days. The city’s meteorological bureau said 552 mm of rain fell between 7 pm on Monday and 7 pm on Tuesday, including 202mm between 4 pm on Tuesday and between 2 pm.