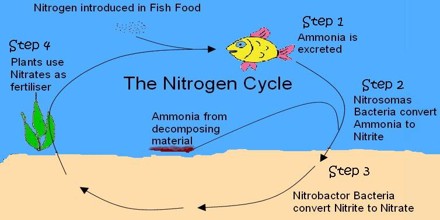 Except assimilation all the four other types are completed by bacteria.

Second step: Nitrification: The process by which ammonia modified to form nitrate is said to be Nitrification.

Third step: Assimilation: Plants, usually, meow NO3 of NH3 by roots which they use to manufactures protein and nucleic acid in their bodies.

The bacteria that convert nitrate (NO3) to free nitrogen arc known as de-nitrifying bacteria. These are the anaerobic bacteria that live to such environment where there is no oxygen.