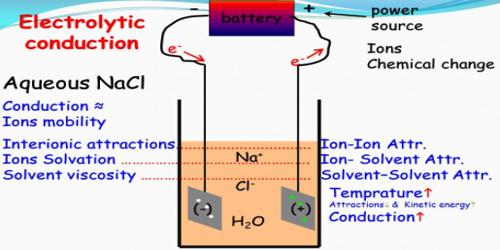 Conductors of electricity may be divided into two groups according to the mechanism by which electricity is carried through them. It is a conduction of electrical current by ions through a solution or pure liquid.

(a) The electronic conductors where electricity is carried by electrons. Metals and graphite fall in this category.

(b) The electrolytic conductors where the electric current is carried by ions. Solutions of acids, bases and salts fall in this category. Substances which conduct electricity in solution are called electrolytes. Examples are known of cases where the current is carried partlly by electrons and partly by ions.

Conductometric Titration of Weak Acid and Weak Base