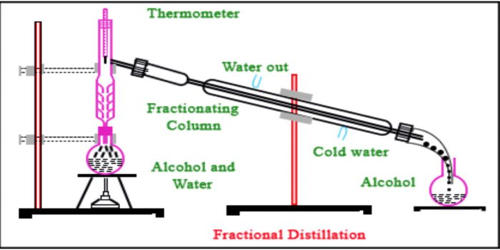 The basic principle of this type of distillation is that different liquids boil and evaporate at different temperatures. So when the mixture is heated, the substance with a lower boiling point starts to boil first and convert into vapors. Let consider a liquid-liquid mixture of A and B where A is more volatile than B this mixture can be separated by the following process:

When you think of this process, the first word that should come to mind is separation. The separation happens when the mixture is heated at a certain temperature where fractions of the mixture start to vaporize. Crude oil is separated into numerous chemicals, such as gasoline, diesel fuel and acetone are examples of fractional distillation. Gasoline and many other chemicals are produced from crude oil using fractional distillation. Crude oil is heated until it evaporates.

Define the Magnetic Quantum Number which is Expressed by m