Home Physics What is the difference between Musical Sound and Noise? 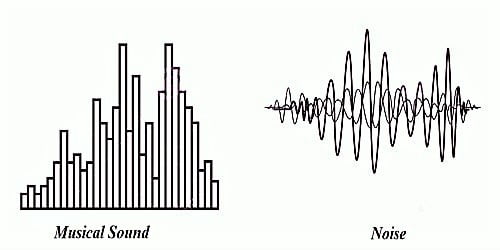 Musical sound is pleasing to the ears while noise is a distasteful sound. Music has an enjoyable effect on ears and mind, whereas noise appears to be nauseating and an irritation. In a theoretical explanation, musical sounds are periodic and somewhat standard. They are pleasurable to our ears and minds, and sound has been one of the utmost forms of expression since the creation of time. Disagreeable sound is often described as noise. Noise is more asymmetrical. When looking at the waveform, a visual representation of sound, music has more patterns and steady variances in volume, but noise is uneven and irregular.

The difference between musical sound and noise are:

Musical Sound: A sound which produces a pleasant effect on our mind is called musical sound. The singing of songs, the sound produced by musical instruments, etc. is musical sound.

Environmental Impact: Not all musical sound affects the environment adversely. 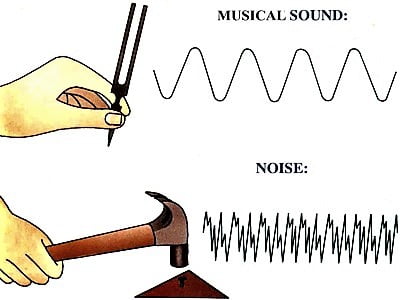 Noise: A sound which produces an unpleasant effect on our mind is called noise. Horn of car, a murmuring of students in the class, etc. are noise.

Environmental Impact: Noise often has detrimental health effects on people and can change the behavior of animals, leading to changes in ecosystems.

The distinction between music and noise is a mathematical form. Music is ordered sound. Noise is disordered sound. Noise is either usual or human-made, either way, the sound has no intended purpose to be entertainment, be listened to by you, and is mainly measured background (background noise). The sound of noise is the side-effect of the intended reason for human-made machines and has no reason unto itself. An example would be the sound an engine makes. The engine purpose is not sound, it is to generate power.

All harmonics are overtones

Difference between beats and interference