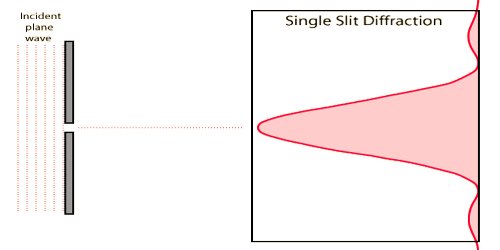 Diffraction of light takes place if the size of the obstacle is comparable to the wavelength of light. After passing through a narrow aperture (opening), a wave propagating in a specific direction tends to spread out. Huygens’ principle tells us that each part of the slit can be thought of as an emitter of waves. All these waves interfere to produce the diffraction pattern.  Where crest meets crest we have constructive interference and where a crest meets trough we have destructive interference.

Fraunhofer’s diffraction at a single slit: Let AB be line-slit whose width is ‘a’, [Fig. (a)]. Suppose plane wavefronts of parallel monochromatic rays of the wavelength it is incident on the slit AB. The emitted rays of light through the slit AB are converged by a convex lens L on the screen MN placed at the focal plane. As a result, a central bright band is formed along the direction of incidence and facing directly the slit.

Fig: Diffraction at a Single Slit

Explanation: Each particle of the plane wavefront in the line AB has the same phase. From those particles, secondary wavers are produced. The transverse waves which travel parallel to DO without any diffraction are converged by the lens L at point O on the screen and that point looks very bright. Here D is the exact central point of the line AB. The waves reach the point D with the same phase and produce constructive interference. Here point O is called the principal maximum point or principal maxima. The brightness of this point is maximum.