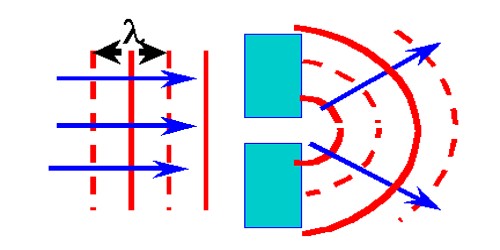 When light passes through an opening it is observed to spread out. This is known as diffraction and becomes more pronounced with narrower openings. Diffracted light can produce fringes of light, dark or colored bands. It occurs when a light wave passes through a corner or through an opening or slit that is physically the approximate size of, or even smaller than that light’s wavelength.

There are two conditions for the production of diffraction: viz –

(1) In case of straight edge: The edge should be very sharp and its width is to be equal to or is of the order of the wavelength λ of light.

(2) In case of thin hole: The diameter of the hole should be extremely small such that it is equal to or is of the order of the wavelength λ of light.

Diffraction is of two types: viz –

(1) Fresnel’s class of diffraction and