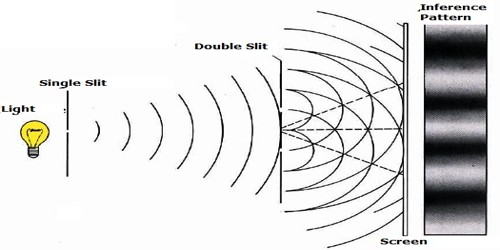 Experiment: Let S be a pinhole in a cardboard and L be a monochromatic source of light. Through S monochromatic light is passing.

S1 and S2 are two identical pinholes very near to each other in another cardboard placed parallel to the first one in such a way as both S1 and S2 are equidistant from S [Figure]. Light waves from the monochromatic source are incident on the pinhole S, which becomes the origin of secondary waves consisting of crests and troughs. These waves, in turn, disturb the pinholes S1 and S2, which emit secondary wavelets with the same phase.

We can, therefore, regard S1 and S2 as two independent sources of monochromatic waves derived from a single source S. The emitted waves being divided into two parts while moving through the medium, form interference. If the two waves meet at a point on a screen with the same phase then that point will show bright. It is called constructive interference. On the other hand, if the two waves meet at a point on the screen in opposite phase, then it will look dark. It is called destructive interference. In the figure dash-dash space in the screen AB are bright points and in the continuous spaces, dark points will be formed.

Young further mentioned that if the source S is removed or distance of S1 and S2 is increased, then interference fringes i.e., a colored band will not be seen. If monochromatic light is taken instead of white light, then alternate bright and dark band will be seen.