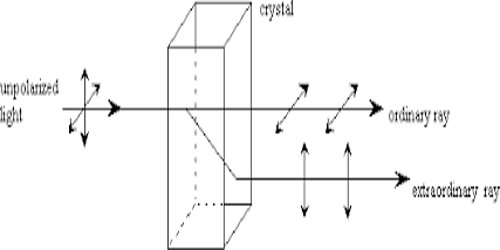 Double Refraction is a division of a single incident light ray or other electromagnetic waves into two separate rays in an anisotropic medium. It is an optical property in which a ray of light entering a medium is decomposed into two rays, each traveling in a dissimilar path. One ray is bent or refracted called the extraordinary ray and the other passes through the medium unchanged called the ordinary ray. This consequence can happen only if the formation of the substance is anisotropic. It can be experiential by comparing two materials, glass, and calcite. If a pencil mark is drawn upon a sheet of paper and then covered with a portion of the glass, only one image will be seen; but if the same paper is covered with a piece of calcite, and the crystal is oriented in a specific direction, then two marks will become visible.