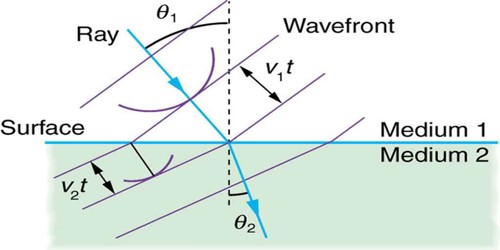 Let ‘a’ and ‘b’ be two transparent isotropic media. Let XY be the surface of separation between the two media. The velocities of light in the medium ‘a’ is va and that in the medium ‘b’ is vb. Here va > vb. 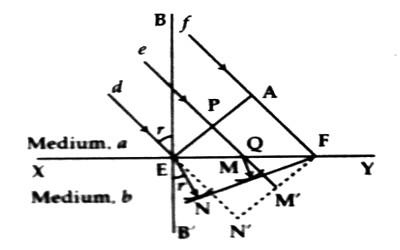 Fig: Refraction in the light

Suppose d, e, f are three parallel rays. These rays are incident obliquely on the XY plane [Figure]. APE is the wavefront of the rays. Let the wavefront EPA first touch the point E of the surface of separation. According to the Huygens’s principle, the particle at the point E being disturbed produces a secondary wave and spread with velocities va and vb, in the media ‘a’ and  ‘b’ respectively. Now, if ‘t’ be the time taken to reach the disturbance from point A to point F, then FA = vat. At that time the light wave from the point E in medium ‘b’ will travel the distance EN. So, EN = vbt. With A as a center and EN = vat as radius, let an arc be drawn and if a tangent FN and it is drawn, then FMN will indicate the wavefront of the refracted ray.

Proof of the laws of refraction:

Let a normal BFBˊ be drawn on XY through the point E.

So, Snell’s law or second law of refraction is proved by it.

Again, the incident ray dE, the refracted ray EN and the normal BEB́ drawn at the point of incidence are on the same plane of the paper. The first law of refraction is proved by it. So, the two laws of refraction are proved on the basis of the wave theory of light.