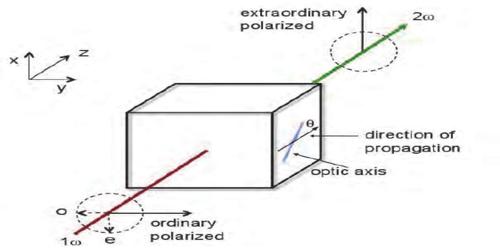 Optic Axis: In all double-refracting crystals there is a particular direction along which light is refracted without double refraction. This direction of the crystal is called the optic axis. It is an imaginary line that defines the path along which light propagates through the system, up to first approximation. It is a line in a doubly refracting medium that is parallel to the direction in which all components of plane-polarized light travel with the same speed. It is not a particular line, but it is a particular direction of the crystal. The optic axis can be drawn through any point of the crystal. It is often coincident with the system’s mechanical axis, but not always, as in the case of off-axis optical systems.

Principal plane: The principal plane with respect to a ray is meant a plane which passes through that ray and the optic axis of the crystal.

Principal section: The plane considered along with the optic axis of the crystal and perpendicular to the two opposite surfaces is called the principal section of that crystal.