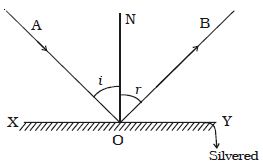 (i) The incident ray, the reflected ray and the normal drawn to the reflecting surface at the point of incidence, all lie in the same plane.

(ii) The angle of incidence is equal to the angle of reflection, i = r.

These are called the laws of reflection.

How Reflection occur at Curved Surfaces