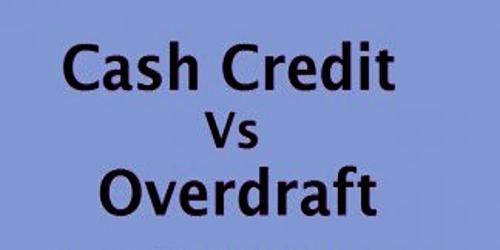 Both “overdraft” and “cash credit” can refer to a type of secured line of credit with a lender. These terms can also refer to financial institutions that allow you to withdraw more funds than you actually have in your demand deposit accounts, although the specific functionalities of these allowances can vary. These provisions are sometimes referred to as overdraft protection, while others might be called cash credits. Be aware of the policies at your own bank or credit union, and know what costs are associated with overdrawing on your account.

Cash credit is a type of short-term loan provided to companies to fulfill their working capital requirement. Overdraft is a facility given by the bank to companies, to withdraw money “more” than the balance available in their respective accounts.

Both overdraft and cash credit are really forms of borrowing. The institution allows you to withdraw funds that you do not have a demand claim to, usually in small amounts. The primary differences between these two forms of borrowing are how they are secured and whether the money is lent but of a separate account.

Cash credits are more commonly offered for businesses than individuals. They require that security is offered up as collateral on the account in exchange for cash. This security can be a tangible asset, such as stock in hand, raw materials or some other commodity. The credit limit extended on the cash credit account is normally a percentage of the value of the security offered.

Sometimes a financial institution offers a cash reserve account but calls it a cash credit instead. Cash reserves (sometimes called cash reserve credits) are unsecured lines of credit that act like overdraft protection. They typically offer higher overdraft limits and have smaller real interest costs on borrowed funds than overdrafts, since penalty fees are not assessed for using the cash reserve account.

There are several different types of overdrafts, but the two most common are standard overdrafts on individual demand deposit accounts and secured overdraft accounts that loan cash against various financial instruments.

A standard overdraft is an act of withdrawing more funds from an account than your balance would normally permit. If you have $30 in a checking account, but you withdraw $35 to pay for an item, a bank that permits overdrafts spots you the $5 and typically charges you a fee for the service. You are generally charged a separate fee for every purchase in excess of your demand deposit balance.

Overdraft accounts, however, act more like a traditional loan. Money is lent by a financial institution as with a cash credit account, but a wider range of collateral can be used to secure the credit. For example, you might be allowed to use mutual fund shares, LIC policies or even debentures. There are even clean overdraft accounts, in which no specific collateral is offered; instead, clean overdrafts arc granted against the worth of the individual. This is usually only possible when the borrower has a lot of funds parked at the financial institution and enjoys a long-standing relationship with the bank.

Salient features of the different types of Mortgages

The position of a Collecting Banker

Differentiate between Promissory Note and Bill of Exchange