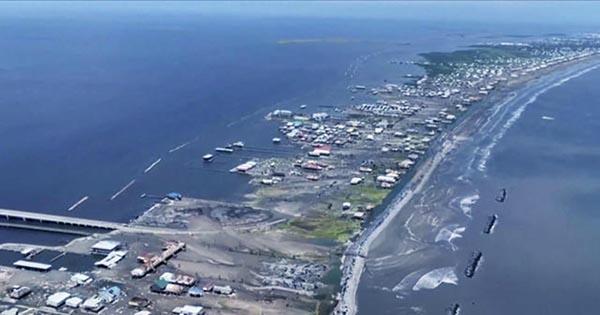 The US Coast Guard is examining a miles-long oil spill in the Gulf of Mexico, which is thought to be the result of Hurricane Ida. Divers have discovered a broken pipeline 3 kilometers (2 miles) south of Port Fourchon, Louisiana, in the Gulf of Mexico’s Bay Marchand area, which may be its source.

The National Oceanic and Atmospheric Administration’s (NOAA) satellite photographs of the leak, examined by the Associated Press on Wednesday, revealed unmistakable black swirls with a rainbow sheen, indicating an oil spill.

The slick appears to be drifting eastward along the Gulf coast for more than 19 kilometers (12 miles) in the photographs. According to the Associated Press, the spill looked to be coming from an offshore drilling facility. Divers have now discovered a 30-centimeter (1 foot) broken pipeline as well as two smaller 10-centimeter (4-inch) pipelines that were exposed and appeared to have been abandoned. The leak was initially considered to be coming from a Talos Energy undersea pipeline, but the Houston-based business refuted this. Talos stated the 30-centimeter pipeline did not belong to them in a statement released late Sunday night.

In any case, Talos hired Clean Gulf Associates, a non-profit oil spill cooperative, to help limit the spill and determine its source, and the Coast Guard is still investigating who owns the broken pipeline.

Until then, Clean Gulf Associates is working hard to clean up the oil — the Coast Guard estimates that roughly 160 liters (42 gallons) have been removed – and limit additional environmental harm.

Fortunately, due to the spill’s distance from the coast, environmental experts say local habitats are not in immediate danger.

“It’s currently making its way along the shore. It hasn’t started coming inshore and damaging the coastal area yet, which is why it’s vital to get as much done as possible before it reaches the coast “NPR spoke with Wilma Subra, a technical advisor with the Louisiana Environmental Action Network.

On August 29, Hurricane Ida made landfall in Louisiana, bringing winds of 241 kilometers per hour (150 miles per hour) and wreaking havoc. The Mississippi River reversed course, fossil fuel production was suspended – all 11 of the area’s offshore rigs and more than half of the offshore platforms were evacuated – and almost a million people were left without power. At least 12 persons have perished as a result of the incident.